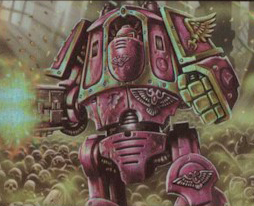 Rylanor was the Ancient of Rites in the Emperor's Children Space Marine Legion during the Great Crusade.

Having served with the Great Crusade since its beginning, Rylanor was eventually wounded in battle with the Eldar some decades before the beginning of the Horus Heresy. Rylanor's life was saved by his conversion into a Dreadnought. He continued to serve in his position of Ancient of Rites after his internment. As the Ancient of Rites, Rylanor held responsibility for overseeing the progression of Emperor's Children recruits from novice to one of Fulgrim's Chosen, and was also said to be able to perceive a lie the moment it was told. Normally stationed aboard the Emperor's Children vessel Andronius, Rylanor maintained the Hall of Rites located there.[1b]

Considered to be a member of the inner circle of the Emperor's Children[1a], Rylanor was one of several senior officers who attended upon the Primarch and executed his commands. It was to him that Captain Saul Tarvitz petitioned for reassignment immediately prior to the ill-fated drop on Isstvan III. Rylanor agreed to the request and transferred Tarvitz from combat duties to a staff placement aboard the Andronius.[1c]

Rylanor himself was dispatched with the Loyalist elements of the Emperor's Children to Istavaan III and was subsequently betrayed alongside his cohorts. Some time after the betrayal was revealed, Tarvitz (who had by now arrived on the surface and assumed command) reportedly ordered Rylanor to guard an underground hangar of some sort. The Dreadnought warrior was not seen again during the battle and was presumed dead by the traitorous victors.[2]

In truth, Rylanor endured and lived on the barren and quarantined world of Isstvan III for the next 10,000 years into the 41st Millennium. Driven insane by the isolation, Rylanor still managed to enact his revenge against Fulgrim. Constructing a psychic beacon to lure Fulgrim to the planet, Rylanor detonated an unexploded Virus Bomb just as the Daemon Primarch's tore the Ancient's organic form from his dreadnought shell. While Rylanor died spiting the Primarch, Fulgrim ultimately survived albeit with wounded pride.[3]