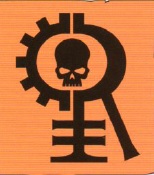 Ryza is a formidable world, known for its plasma weapons and vehicles mounted with them, such as the feared Leman Russ Executioner (which is no longer produced by any other Forge World)[1][2b] and the Stormblade Super Heavy Tank (which was first developed on Ryza).[2c] The Forge World is home to the Titan Legion known as the Legio Crucius (a.k.a. the Warmongers).[2a] 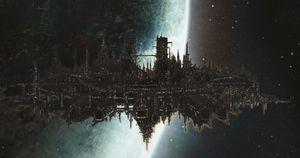 Ryza's approach is defended by an artificial moon known as Ryza Secundus. It is large enough to hold an entire Expeditionary Fleet of the Great Crusade. Today, the artificial celestial body is inscribed with the names of 12 House Vornherr Knights which fought to the end to defend it during the Defence of Ryza in the Horus Heresy.[7a]

Ryza was settled during the Dark Age of Technology and became the center of a great technological empire. During the Age of Strife Ryza was isolated from other Forge Worlds and its colonists survived within the city of Prosperity. During these desperate times the people clung to faith.[7c] Thus the Omnissiah Igvita (or "Life Blood of the Omnissiah") was founded on Ryza and dedicated itself to the study of all plasma technology.[7a]

When the Imperium arrived during the Great Crusade, Ryza peacefully assimilated into the domain of the Emperor. By the end of the Great Crusade, Ryza stood second only to Mars in power and prestige among the Martian Mechanicum. Its production capability, specialty in plasma manufacturing, and strategic location allowed it to be one of the central points for the Imperial expansion into the eastern Galaxy.[7a] Its power and hoarding of advanced plasma technology creatures some tensions and suspicious with Mars, leading to the world strengthening its forces in preparation for conflict.[8] This proved to be fortuitous, as during the Horus Heresy Ryza became known as a loyalist bastion in the East, leading to it being assaulted by the Dark Mechanicus. In the battle that followed the loyalists prevailed, though over 4/5ths of the planet's infrastructure was destroyed.[7b]

Ryza has been attacked by not one but two Ork Waaagh!s — Waaagh! Grax[3a] and Waaagh! Rarguts.[6b] During the 13th Black Crusade though, Waaagh! Grax was finally defeated, but disaster struck the Forge World in the aftermath of the Great Rift's creation and Ryza soon found itself invaded by hordes of Daemons. Now only the presence of the numerous Astra Militarum Regiments that were originally sent to deal with the Ork Waaaghs! have prevented the Forge World from falling to the forces of Chaos.[5] 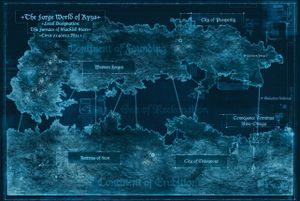 Map of Ryza during the Horus Heresy[7a]