Sabbat Martyr is the seventh novel in the Gaunt's Ghosts series by Dan Abnett.

With the future of the Sabbat Worlds campaign balanced on a knife edge, new hope arises in the form of Saint Sabbat herself, reincarnated to lead the Imperium to victory against the dark forces of Chaos. The living saint calls for Colonel-Commissar Gaunt and the Tanith First to be her guardians. Doubting that she is who she claims, Gaunt must discover the truth while fending off enemy troops and lethal assassins. But treachery within the Ghosts will not only threaten the mission, but will rip the Tanith asunder.

At the request of the reincarnated Saint Sabbat, the Tanith First-and-Only is summoned to the remote and tactically insignificant world Herodor. The Civitas Beati, a holy city dedicated to the Saint, is under assault from a legion of Blood Pact, led by Enok Innokenti. While the Ghosts prepare to defend the city alongside the local PDF force, Gaunt learns the truth of the situation: the woman posing as the reincarnated Saint is Sanian, an esholi whom the Ghosts encountered on Hagia. Utterly convinced that she is Sabbat, Sanian has clearly lost her mind. Lord-General Lugo - whose career has been unstable since his disgrace at Hagia - plans to use her as propaganda, and does not care that she is an imposter; he believes that he will be forever remembered as the man responsible for a miracle in the Sabbat Worlds. As far as untold thousands of pilgrims, Imperial and archenemy troops are concerned, Sanian is the true Saint.

However, things take a strange turn when Sanian actually does become the host for the Saint's spirit, after Sabbat's true incarnation perishes in the assault. Innokenti deploys nine specialist assassins to the Civitas Beati under the cover of the invasion. Their purpose: kill the Saint and shatter the morale of the Imperials. With the Imperial fleet all but destroyed and surrounded by an enemy who has multiple advantages over them, the Ghosts face one of their most daunting challenges yet.

The title Sabbat Martyr is a reference to the psychic message experienced by a number of Ghosts in Honour Guard. Ultimately, it is Corbec who becomes a martyr in Sabbat's name, as he gives his life defending her from the final assassin. 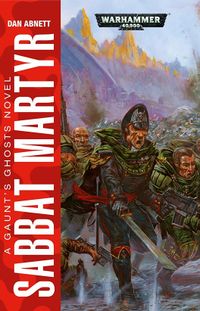