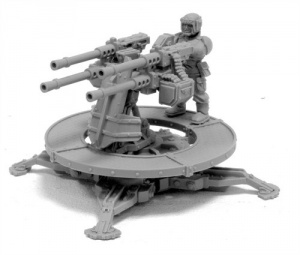 The Sabre Gun Platform is a static defensive emplacement used by the Imperial Guard and Planetary Defense Forces.[1] They are favoured by armoured and support regiments,[2] and regiments tasked to defend a strategic location, where they are issued to Heavy Weapons Platoons in place of their normal load-out.[1] Two Guardsmen are needed to crew the platform, which features duel heavy weapon mounts able to be fitted with standard Imperial Guard weapons for ease of supply and maintenance. Common mountings include twin-linked Heavy Bolters for anti-personnel duty, twin-linked Lascannons for anti-armor firepower, and either twin-linked Autocannons or quad-mounted Heavy Stubbers for air defence.[2] In place of weaponry some Sabre platforms will instead mount a massive Searchlight for illuminating targets in darkness.[1]

Before moving to another position the platform needed to be fully broken down. This is more hardly when under the fire or in other fighting circumstances. Instead Sabres placed around the key objectives and often their operators found themselves forming last line of defence of any failing campaign. It's not surprising that many Guardsmen rightly consider assignment to a battery of Sabres as a death warrant.[4]

Though the Source [1] stated that there are two crewmen needed to operate the Sabre Gun Platform, Source [4] says that only one infantryman is enough.