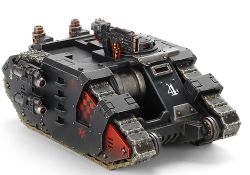 Sabre vehicle without a weapons mount[2]

The Sabre Strike Tank or Sabre Tank Hunter was an Imperial attack vehicle based on the Rhino armoured carrier, incorporating a fixed, forward firing weapon in its front hull. It was used during the Horus Heresy and Great Crusade.[1]

The Rhino itself was conceived to be easily modified to answer various specific needs. Many Rhino variations have their origins during the Horus Heresy, when variations of existing vehicles to fulfill new roles became a necessity. The Sabre was one of these modifications, seeing its first use during the earliest days of the Heresy, its design spurred by the need for heavier firepower. The Sabre was one of the type of Rhinos modified during the Heresy wars to mount heavier weapons, this type becoming known as "Tank Hunters" for the role they played during the Heresy. Besides the Sabre, various types of Tank Hunter were developed, each mounting different heavy weapons, such as missile launchers or lascannon. However, the Sabre was the most common form of Tank Hunter.[1] The Sabre was devised as a part of a new generation of Astartes vehicles alongside the likes of the Sicaran Tank and was developed from experience gathered during the Great Crusade. It embodied a new mobile style of war that departed from the static gun lines of the early Crusade.[4]

Fast, rugged and heavily armed, the Sabre served the Legiones Astartes as a strike tank, attacking key enemy targets and destroying them long before they can pose a threat. Once the immediate foe was annihilated by its advanced weaponry, the speed of these vehicles allows them to evade any further counter-attack and reform to strike at the vulnerable flanks of the enemy army, keeping heavy armor suppressed as the infantry advanced.[3]

The most well remembered combat use of the Sabre was during an incident in which Dark Angels Space Marines had retaken a city from a combined force of Ork Freebooters and Chaos Renegades, only to be pushed back by Ork reinforcements. The Dark Angels fell back past a great bridge spanning the mile-wide crack called the Black Gorge. The bridge itself, a structure of adamantium from the Dark Age of Technology, could not be destroyed; instead, the Dark Angels set up a single squadron of Sabres at a site overlooking the bridge, and allowed the Orks to cross much of the bridge before the Sabres began to fire. First the lead vehicles were destroyed, blocking the bridge's front. With the column halted, the Sabres began firing at the column's rear, blocking any retreat. Then began the slaughter of the entire Ork column.

The tank was designed to quickly close the distance to its target, before utterly destroying it. To achieve this, the Sabre can be fitted with a range of advanced weaponry and fielded in squadrons of up to two tanks. Its weaponry includes a choice of top-mounted weapons – which included a Heavy Bolter, Multi-Melta, Volkite Culverin or Heavy Flamer. There are also four optional one-shot Sabre missiles that you can add to your tank and various hull-mounted weaponry. This includes a Anvilus Snub Autocannon, Neutron Blaster, or a Volkite Saker. It was also fitted with side-mounted Missile Launchers which fired low-velocity advanced shaped warheads.[2]