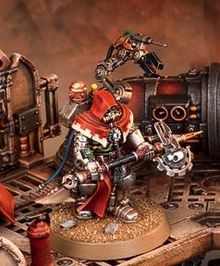 Sacristans are a type of Tech-Priest dedicated to the maintenance of Knights.[1]

These are Artificers that are inducted from Knight Worlds. Whenever a cargo ship arrives from a forge world to collect food and resources, it will also take a small party of apprentices from the Knight world. These apprentices are drawn from all levels of society and could be the third son of a Noble, or the offspring of a lowly farmer. Over the course of their decade-long apprenticeship on the forge world, they are trained in the skills needed to maintain suits of Knight armour and then returned to their planet of origin as a fully trained Sacristan. Unbeknownst to the Imperial Knights, however, the trainees are also indoctrinated into the Cult Mechanicus, providing a network of agents who can further the interests of the Tech-Priests.[1]

The local artificers that maintained the Knight armour during the Age of Strife had already established themselves as a vitally important part of each knightly house, and the training they have received from the Adeptus Mechanicus has only served to increase their status. From their first foundation, the Sacristans quickly styled themselves as a priesthood for the half-forgotten mysteries of the technology that they knew, and as their power grew, the relationship between them and the knightly houses shifted and changed. Where in the past, the technicians were seen as mere subjects or vassals, the Sacristans soon began to speak with one voice, and by threatening to remove their services from any house that would not heed their advice, they soon became almost as influential in knightly society as the Nobles themselves.[1]

In general, this has benefited the knightly houses, for the Sacristans act as something of a counterpoint to the natural arrogance and warlike tendencies of the Knights, and have often been able to arbitrate between different houses to ensure they do not wipe one another out in bitter feuds. However, this political might is also an important tool for the Adeptus Mechanicus, which the Tech-Priests use to try and bend the Knight worlds to their will. More often than not, however, the Knights’ ingrained sense of honour and duty often drives them to follow a course of action that the Adeptus Mechanicus would far rather they ignore.[1]