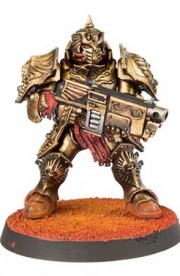 A warrior of the Sagittarum Guard

The Sagittarum Guard are a sub-sect of the Custodian Guard within the Tharanatoi Caste.[1]

Among the least common type of Custodes warrior, these warriors fulfill a vital role in battle. As opposed to the majority of the Custodes who fight at close range with Guardian Spear, the Sagittarum Guard attacks foes over a distance, often with devastating heavy weapons. In addition to this role, the Sagittarum Guard served as the sentinels of the outer perimeters of the Imperial Palace during the Great Crusade and Horus Heresy. On Terra they maintained checkpoints and constant vigils over the external regions of the Palace complex. In this role they were renowned to recall any face, movement pattern, and speech.[1]

In battle, members of the Sagittarum Guard were most typically equipped with Adrastus Bolt Calivers, Adrathic Destructors, and Melta Bombs.[1]