Saim-Hann is an Eldar Craftworld with a reputation for wildness and a preference for lightning-fast attacks.

Saim-Hann (literally, "Quest for Enlightenment") is regarded by other Craftworlds as anything from a slightly wild and dangerous place to a nest of barbarians living on the edge of Eldar society. They have developed the Path of the Eldar in a much more flexible way than other Eldar. On Saim-Hann, the Path is still a form of control over Eldar life, but it allows Eldar to experience the more wild and carefree ways of old. This practice is regarded by other Eldar as being dangerous, as it was just those sorts of feelings and experiences that led to the Fall of the Eldar. It is said that Saim-Hann was one of the first Craftworlds to escape the Eldar homeworlds before the birth of Slaanesh. It still maintains many links with the somewhat primitive Exodites.[Needs Citation] 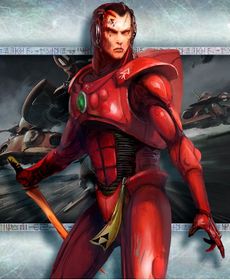 The symbol of Saim-Hann, the Cosmic Serpent, is the only creature believed by the Eldar to exist both in the Materium and Immaterium at the same time. Hence, the serpent is said to know all secrets, past and present.[2] The Cosmic Serpent is the brother of Shaimesh, a Dark Muse of poison and assassins, telling of a darker heritage.[3]

The Warriors of Saim-Hann are proud, boisterous and aggressive, and use fast, mobile troops with a high quantity of Jetbikes. Young Guardians are always trying to outdo each other in contests of speed, and particularly in battle. Their symbol is the Cosmic Serpent, and they wear red armour with contrasting black and white detailing. They also tend to use striping techniques on their vehicles.[Needs Citation]

Almost every member of Saim-Hann is part of a Wild Rider family, including the seers, and this allows them to field many specialists who ride Jetbikes and Vypers. The families maintain a feudal hierarchy ruled by one Eldar and the rule is passed down through hereditary tradition. The closest family to the "Chief" become the Kinsmen, who form the ruling elite of the family. The families will decide for themselves whether to go to war and the Kinsmen will then guide the chief in battle.[Needs Citation]

Some families also fight with each other, although they usually take the form of a ritual single combat between champions. These contests are not uncommon, although fights to the death are very rare as first blood is usually sufficient to determine a winner.[Needs Citation]