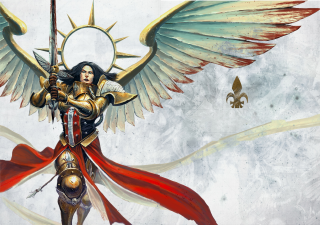 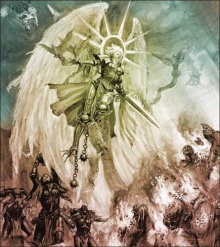 "She was an angel, pure as righteous destruction. She laid low the twisted and lifted the hearts of the righteous. At her passing, a million voices cried out her name. Shall we ever again see her like? No, not now, nor ever again..." Saint Patricia on the disappearance of St. Celestine[1a]

Saint Celestine is a legendary member of the Adepta Sororitas. Now a Living Saint, she has been described as a grand design of the Emperor unfulfilled.[3] She has lived multiple lives in the Emperor's service, and each time she is slain is reborn once more.[6a]

Little is known of her life and battles before she was proclaimed a Living Saint — presumably they were suppressed. In her earliest known form she was a citizen of Terra during the Horus Heresy. She was killed during the orbital bombardment of Terra during the Siege of the Emperor's Palace.[6a]

In a later life she was a Sister Repentia of the Order of Our Martyred Lady and that she was but one warrior fighting at the prolonged Palatine Schism, against thousands of heretics. Celestine was thought to have been killed in battle before the capital city of the planet Eurytion, and was said to have killed over one hundred schismatics before she fell. Her body was retrieved by her sisters, and was found to have life still in it. Believing her touched by the Emperor himself, the Sisters cleansed her body and found her to be free of wounds. The next day, the assault resumed with Celestine at its head. The battle lasted mere hours. Celestine became the figurehead of the Palatine Crusade, leading the forces of the Imperium to countless victories. At last, the Crusade's commander, Lord Ansgar wanted to assault the sector's capital world, but Celestine instead ventured to a backwater world called Sanctus Lys, which was home to an ancient shrine once visited by Saint Katherine. There she entered a hidden crypt, alone, forbidding any present to follow.[Needs Citation]

At the first light of dawn, Celestine rose from the crypt changed. Clad in the Armour of Saint Katherine and wielding The Ardent Blade, she had become a vessel of the Emperor's divine radiance; she was declared a Living Saint by Lord Ansgar and his Thorian compatriots. Hailed as the 'Hieromartyr of the Palatine Crusade', Saint Celestine led the warriors of the Imperium to victory in a multitude of Wars of Faith, dispatching tens of thousands of heretics and enemies of the Emperor. The Adepta Sororitas venerated her, and her sisters would have followed her into the Eye of Terror, had she asked them to.[Needs Citation]

Saint Celestine was lost on Forrax, as the treacherous Warmaster detonated an atomic failsafe in his fortress, annihilating everything for miles across. When news of her death reached Holy Terra, the Tower of Heroes tolled once to mourn her loss, but the Sororitas in their halls in Convent Prioris were comforted with the thought that Celestine would be at the side of the Emperor.[1b]

She appeared unexpectedly in 980.M41 at a crucial moment of the Promethean War on Heletine, where the Order of the Ebon Chalice and the Salamanders Space Marines were engaged with forces of the Black Legion. There she turned the tide against the Chaos Space Marines and drove a spearhead directly to the Daemon Prince Lord Gralastyx, and ultimately slew him. When the dust of the victory had settled, however, there was no sign of her. It remains unclear if this happened during her life or after she had been declared dead on Forrax.[2]

During the 13th Black Crusade, Saint Celestine once again manifested at the host of thousands of Sisters of Battle which had been thought lost in the Warp for centuries. She proved decisive in the battle and became one of the key Imperial commanders, personally battling Abaddon the Despoiler. She resurrected two faithful Canoness' during the war, Eleanor and Genevieve, who became her champions known as the Geminae Superia. However despite her best efforts Cadia ultimately fell and Celestine guided many of the survivors including Belisarius Cawl, Inquisitor Greyfax, and Marshal Marius Amalrich to Kalisus at the behest of a psychic vision. There, they found a Webway Portal and Eldar allies who saved them from the pursuing Black Legion.[3]

Saint Celestine continued to lead her survivors, now known simply as the Celestin, on a Crusade to Macragge. There Cawl was able to resurrect Roboute Guilliman as Ultramar was invaded by Chaos forces. Afterwards Celestine accompanied the reborn Primarch on the Terran Crusade, and was one of the few to successfully reach Terra.[4]

Shortly after the Terran Crusade, Celestine became embroiled alongside Inquisitor Greyfax in the attempts by Ecclesiarch Decius XXIII to repeal the Decree Passive. Ultimately after fighting on San Leor and Ophelia VII, the Tyrant of Blueflame revealed himself and his plan to use Celestine as a vessel to manifest into reality. As she became possessed, Longinus was forced to kill her. However much to everyone's shock she was instantly reborn. Tracing the Tyrant of Blueflame's corruption back to the Ecclesiarch, Celestine later slew him.[7]

Sometime later on Tsadrekha, Saint Celestine appeared to help the Imperial Fists and local army against a Chaos invasion. After a long battle against Chaos forces, the Saint entrusted the psyker who acted as an astropathic beacon on that planet to Kassar of the Alpha Legion and prepared to fight against Khârn. In the end, Celestine died at hands of the World Eater.[5]

Celestine woke up in the dimension of the Warp, on top of a huge mountain made of skulls, bones and broken and rusted armors. All around her neck there was a deep scar that soon faded away. Celestine had lost her memory, but she soon realized who she was and that she was experiencing one of her many deaths. She walked in a nightmarish landscape full of daemons, and facing various trials, regaining her memory, armour and sword. She found two other ladies, who were revealed to be parts of her own soul: Faith and Duty, and a young girl who was her Hope. After the trials she was able to return once more to life.[6]

She appeared on the planet of Kophyr, where she lead the few available Astra Militarum forces against War Engine, the leader of a Blood cult of Khorne that had taken control of the planet. However, while the campaign was successful, she was betrayed by an Inquistor who fell under the sway of Khorne. The Inquisitor used his psychic powers to turn half the Imperial Guardsmen against Celestine. While the mutiny was defeated, Celestine was killed by a close range melta gun shot. Upon dying, she awoke once more a top the mountain of bones, with no memory of who she was.[6]