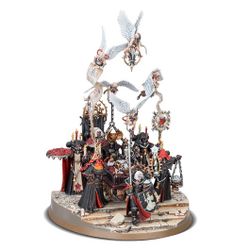 The remains of St. Katherine[2]

Katherine Elysius[1] (later canonized as Saint Katherine), also known as the The Shield Bearer, was the founder of the Order of the Fiery Heart.[4]

Regarded as Alicia Dominica's second-in-command, Saint Katherine is said to have been the bearer of Dominica's Praesidium Protectiva, and was well known for her determination and avenging spirit, seen always at the brunt of any conflicts and leading many wars of faith against heretics and witches in the name of the The Emperor. As member of the Brides of the Emperor, Saint Katherine was one of the six sisters who was brought before the Golden Throne at the climax of the Age of Apostasy, and was present when Vandire was executed.[3]

Subsequently, she founded the Order of the Fiery Heart, named due to her fiery persona. She led her order in countless battles across the galaxy, and was declared a Living Saint, becoming a legend in her own lifetime. Some time before her death, Katherine visited the world of Sanctus Lys, and in a hidden crypt beneath a shrine interred the golden power armour of Saint Katherine and The Ardent Blade.[Needs Citation]

Katherine was killed by the Witch-cult of Mnestteus, and her order was renamed as the Order of Our Martyred Lady due to the deep mourning of her sisters.[5]