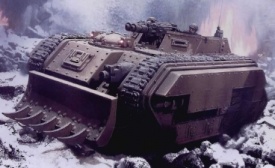 The Salamander Command Vehicle is an Imperial Guard vehicle based around the same chassis as the Salamander Scout Vehicle, the Chimera. It is equipped with better command and communication equipment and frequently used by armoured company HQ's and armoured reconnaissance squadrons.[1a]

The Salamander Command is issued to company command units as a combined transport, liaison and communications vehicle; while often used for armoured formations other types of fighting units such as light infantry also make use of these vehicles. An exception is heavy tank companies, which are normally commanded from one of the super-heavy vehicles, though they find use as support vehicles. While not meant to be a frontline fighting unit, the Salamander's useful qualities have found it performing other jobs besides command and control. Artillery units use these vehicles as mobile forward observation posts, while many Commissars have been known to requisition them as their own personal transport. In a pinch they can also be used as a general utility vehicle for towing supplies or weapons if there is a shortage of Trojans.[1a]

When used in a command role the Salamander is crewed by a company's Captain and his command staff. As with the Scout variant the Command vehicle features a rear platform for the vehicle commander and comms-operator, although this space is given over to extensive communication equipment allowing the Captain to command his unit, keep in touch with other company commanders and communicate with his regimental commander. The Heavy Flamer or Heavy Bolter is also operated from the rear platform, while the driver and hull-mounted Heavy Bolter gunner sit in the forward compartment. All Salamander command vehicles are also fitted with surveyor gear; in the Vanaheim pattern this comes in the form of a multi-spectral suite operated by the driver which includes magnification, tracking and night vision equipment. Salamanders may also be upgraded with Camo Netting, Extra Armour, a Hunter-Killer Missile, a Mine Sweeper, a pintle-mounted Heavy Stubber orStorm Bolter, Rough Terrain Modification, a Searchlight, Track Guards and Smoke Launchers.[1c] 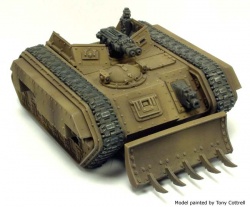