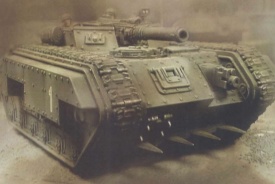 The Salamander Scout forms the backbone of an armoured regiment's reconnaissance company, operating at the forefront of an attack in order to observe enemy deployments. Though no match for a tank, it is fast and capable of leaving any dangerous situation quickly and, unlike the Sentinel scout, capable of protracted engagements with the light vehicles of enemy scout units.[1a]

Salamanders usually work in pairs for mutual protection, taking turns as one vehicle moves forward under the cover of the other, since they are most likely to be ambushed or encounter a strong enemy position. For major offensives when there are insufficient numbers of Salamander Scouts it is common to mix them with Armoured Fist Squads temporarily detached from their parent platoon or company. While an offensive unit by nature, Salamander Scouts are also used for rear area policing and security duties, such as patrolling supply routes or guarding headquarters units, when operating on the defensive.[1a]

The Salamander Scout uses the Chimera chassis with a number of modifications. In place of a troop compartment is a rear fighting platform where the vehicle's commander and comms-operator are located, along with navigational, long-range and back-up communication equipment and the vehicle's Autocannon. The communication equipment, powered by its own dedicated generator, allows the vehicle to maintain contact with command units up to the regimental level, including Leviathan transports. The driver and gunner for the hull-mounted Heavy Bolter sit in the forward compartment of the Salamander Scout. The vehicle's twin engines, housed in the track sponsons on either side of the main hull, are often overcharged in order to increase the vehicle's top speed. While a breach of regulations and a source of extra strain on the engines and their maintenance crews, given the dangers faced by such scouting units this modification is often overlooked by commanders.[1a]

Other more standard modifications made to the Salamander Scout include Camo Netting, Extra Armour, a Hunter-Killer Missile, Improved Comms, a Mine Sweeper, Rough Terrain Modification, a Searchlight, Track Guards and Smoke Launchers.[1c] 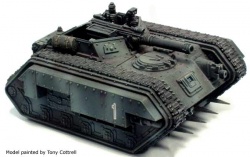