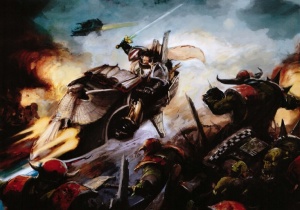 Sammael is the present and 348th Master of the Ravenwing[1], the 2nd company of the Dark Angels Space Marines Chapter. He is the youngest Dark Angel to ever be inducted into the Ravenwing.[3]

Originally serving in the 8th Company as an Assault Marine, Sammael was chosen for induction into the Ravenwing by its Master Gideon due to his skill. After many great accomplishments against Orks, Traitors, and Eldar Pirates, Sammael fought alongside Gideon in their brief encounter with the arch-foe of the Dark Angels, The Fallen, on Kaphon Betis. There Gideon nearly encountered Cypher before the Fallen Angel again eluded the Dark Angels grasp. After the battle Sammael took several prisoners from pro-Xenos cults and learned of Cypher, and with this revelation Gideon unofficially inducted him into the Inner Circle.[3]

Sammael's promotion to his current office came more than a century ago during the Kapua Uprising. As Gideon lay dying after an attack by the Chaos Reaver Titan Traitorous Ire, the old master declared Sammael to succeed him. Sammael then took up Gideon's mantle and oversaw the destruction of the Traitor Titan.[3] Sammael's first action as master of the Ravenwing came as he led his company in the invasion of Rastabal[1] (occured in 465.M41)[4] and led assaults on rebel forces during the Fourth Quadrant Rebellion. He then led the 2nd Company in the war against the Ork Empire of Charadon in the Invasion of Rynn's World. After his Thunderhawk was shot down by Ork forces, Sammael staged the only recorded successful aerial-drop separation maneuver, flying out of the gunship on his jetbike.[1]

Known to be as bold as he is reckless, Sammael's audacity is well-noted. Nonetheless, his reign as the Ravenwing's Master has been unusually long and successful and his boldness has benefited him on numerous occasions, such as dodging between Battlesuits to cut the Ethereal Sha Aux'Phan in twain.[1]

Sammael took part in the attempt to aid the inhabitants of the Gehöft during the Gehöft Daemonic incursion. Although his Dark Angels and theirs allies of the White Scars and Brindelweld Imperial Guards valiantly fought the Nurgle daemons, Blighted Claw Chaos Space Marines and Plague Zombies, the planet was lost and declared Exterminatus. It is rumoured that Sammael pursued on the planet his own goal though.[2]

In battle he has access to Corvex, the only known remaining Imperial Jetbike, but sometimes also rides a Land Speeder known as Sableclaw.[1] He fights with the Power Sword known as the Raven Sword.[Needs Citation]

Codex: Dark Angels (6th Edition) states that Sammael has been the Grand Master of the Ravenwing for over a century, while Azrael had only just come into his respective rank in 939.M41. However, in short story the A Hunt in the Dark portrays that Azrael already as Supreme Grand Master at the time of Sammael's promotion.[1][5] 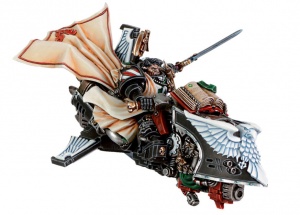