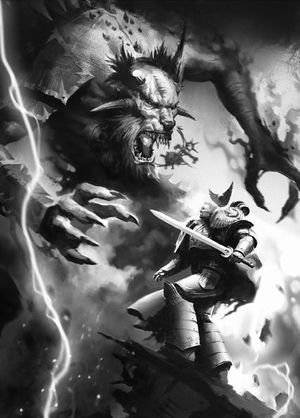 Samus (Daemon Prince of the Ruinstorm)[6] is the name of a daemon that was initially manifested on Sixty-Three-Nineteen near the end of the Great Crusade.[1c][1d] The creature went on to plague the Imperium throughout the Horus Heresy.

In the local legends of Sixty-Three-Nineteen, the Whisperhead Mountains range was an area where the barriers between reality and the spirit world were most permeable. According to their mythic history, one of the first "Emperors" of the planet had combated and restrained a very malignant spirit, called Samus, in the area. Over time, that spirit had come to be seen as the local equivalent of "the Devil," who was nevertheless prayed to by some of the rebellious natives in the face of the Imperium's annexation of the world.[1b]

Several fanes and shrines were dedicated to Samus throughout the Whisperhead region, the majority of them in the caverns of the highest peak. During the Battle of the Whisperhead Mountains, the Imperial forces destroyed these as they advanced through the territory. While the Imperium later conjectured that Samus was somehow deliberately unleashed upon them, it is also possible that these fanes were part of the restraint placed upon Samus (if the old legend is believed) as his attack came soon after around thirty of them were destroyed.[1b]

Samus possessed the body of Sergeant Xavyer Jubal of the Luna Wolves Space Marine Legion. In this form, Samus was able to eliminate over a dozen Marines before being defeated. He also killed several remembrancers accompanying the Wolves' deployment.[1b][1c]

Samus was defeated when Captain Garviel Loken and Sergeant Nero Vipus fired over ninety bolt rounds into his body, bursting it apart beyond its capacity to operate, and then incinerated the remains with a flamer. It is probable that Samus's spirt was banished back to the freedom of the Warp by this action, no longer restrained to the one location.[1d]

The entire "Samus incident" was hushed up by order of the Warmaster Horus, to hide both the knowledge that an Astartes had turned on his fellows, and that it was possible for malignant warp-entities to corrupt them.[1d]

Samus would appear again during the Battle of Calth as part of the demonic army summoned by Erebus. This time he possessed the body of Word Bearers Captain Morpal Cxir, who deliberately provoked Ultramarines Captain Teus Sullus into killing him, in order to "summon" Samus into realspace.[2a] Samus ran amok inside the Ultramarines' stronghold, but was finally banished after being stabbed by Captain Remus Ventanus, using Cxir's own athame knife.[2b][2c]

While Horus was planning the extermination of the Blood Angels on Signus Prime, Ka'Bandha remarked to the Warmaster that "Samus sends his regards", indicating the daemon is still "alive" and well within the warp.[3]

Samus later possessed the headless corpse of Serghar Targost after Rama Karayan shot Targost through the head before he could invest Proximo Tarchon with a daemon in the bowels of the Vengeful Spirit. He managed to kill Tubal Cayne before Tarchon destroyed Targost/Samus with his gladius.[5]

Samus' next manifestation took place during the final phase of the Solar War. He first took on the persona of Euphrati Keeler in the dreams of the Remembrancer Mersadie Oliton, urging her to go to Terra and meet Rogal Dorn to deliver urgent news about Horus' plan. As Keeler escaped her captivity and journeyed to Terra, he took the form of the Navigator Nilus Yeshar and appeared exclusively to Oliton, aiding her throughout her journey. Finally after being rescued by Garviel Loken, Oliton was brought aboard the Phalanx to meet with Dorn at the height of fighting in the Sol System. Samus' plan was complete, and he manifested into the Phalanx directly through a Warp-eye implanted on Oliton years earlier by Maloghurst. Leading Daemonic hordes across Dorn's battlestation, Samus engaged the Primarch directly in combat. Though slain by Dorn, Samus was able to simply reincarnate himself into a new corpse and begin his rampage anew. He battled Loken once more, causing the Knight-Errant to go mad and revert to his "Cerberus" persona. In order to stop Samus, Oliton committed suicide in order to close the portal from which he had manifested. With her death, Samus vanished.[7]

He was later among the Greater Daemons summoned into Realspace by the Thousand Sons, during the Battle for Terra[8a]. After the Lion's Gate Spaceport fell to the Traitors, the Daemons were unleashed to destroy the Imperial Palace's Colossi Gate[8b]. While they succeeded in tearing down the Gate's outer defenses, the Daemons were destroyed by the White Scars' Stormseers and the Adeptus Custodes, before they could complete their task.[8c]

In addition to his ability to possess mortals, which made the bodies in question look significantly aged, Samus had enhanced strength, enough to crack open power armour with a directed strike.[1c] Samus was also able to interrupt and even wash out vox-channels of the Imperial forces with an unnerving, repeated chant:

"Samus. That's the only name you'll hear. Samus. It means the end and the death. Samus. I am Samus. Samus is all around you. Samus is the man beside you. Samus will gnaw on your bones. Look out! Samus is here."[1a]

This was thought to be rebel propaganda broadcast over the communications network, even though there were reports of individuals without personal vox-sets hearing the voice of Samus as ghostly whispers.[1a][1b] While the death of his mortal host incapacitated him for a time, he was eventually able to animate and change the body, taking on a gross, distorted aspect that featured a dog-like head, hunched posture and long claws.[1c] 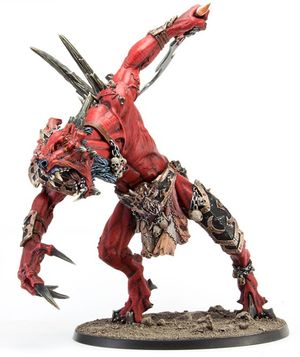