Symbol of the Sanguinary Guard 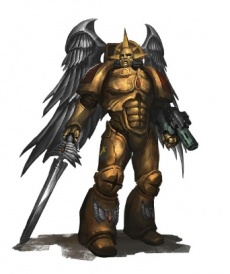 The Sanguinary Guard, also known as the Ikisat or the Burning Ones[3], are the utmost elite of the Veterans of the Blood Angels, proven in mind, body, and spirit, and exemplifying the values of their Primarch Sanguinius to an extent no other Space Marine can.[Needs Citation]

This hallowed Order of warriors traces its lineage back to the personal bodyguard of their Primarch, fighting by his side in the most terrible battles imaginable, before being nearly wiped out during the assault on Horus' battle barge.[Needs Citation]

Only a single survivor remained of that august force: Azkaellon, Herald of the Primarch, and only because Sanguinius insisted that he remain on Terra. It was on his shoulders that the heavy burden befell of the reconstitution of the Order, to serve as a beacon of hope for the dark days that lay ahead. It is largely through his efforts that the legacy of the Sanguinary Guard survived in the Blood Angels, and spread to all its Successors.[1a]

Unlike other Veterans, the Sanguinary Guard do not select wargear according to their expertise, but instead use weapons and armor traditional to their Order: the wrist-mounted Angelus Boltgun and the Glaives Encarmine, two-handed Power Weapons. Golden Artificer Armour girds their bodies, and baleful Death Masks cover their faces, while they leap into battle courtesy of winged Jump Packs. Depending on the situation, they may carry the Chapter Banner to war.[1c] 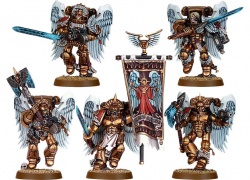