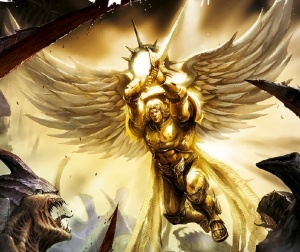 The Sanguinor is a mysterious figure that appears during the Blood Angels' greatest need. To many among the battle-brothers of the Chapter he is a myth, as few ever survive the battles that warrant his appearance, but members of the Blood Angels' Reclusiam know otherwise, keeping detailed records of his manifestations throughout the millennia.

While the Sanguinor's deeds are unquestioned, there has been much debate regarding his true nature. Members of the Chapter Council argue that he is the manifestation of Sanguinius' noble nature, lost to the Chapter with his death at the hands of Horus, while the Sanguinary Guard believe that he is the founder of their Order, Azkaellon, preserved beyond time through the Emperor's grace.[1a] There are Blood Angels who believes that Sanguinor is a soul of a wronged brother seeking redemption and there are those who do not believe in Sanguinor at all, thinking that it is just a symbol of Blood Angels rage.[2] The Inquisition have their own opinions about the matter, theorizing that the Sanguinor is some sort of psychic construct, furthering their thoughts that the Blood Angels are just one step short of damnation. Whatever the truth of the matter is, the Sanguinor is an honoured part of the heritage of the Chapter, as integral as the rest of their traditions and mysteries[1a].

The role of Sanguinor began during the Horus Heresy, specifically the Unremembered Empire of Imperial Secundus. Believing Terra had already fallen, Roboute Guilliman and Lion El'Jonson elected Sanguinius as the new Imperator Regis. But, unwilling to allow Sanguinius to make public appearances for fear of assassins, Azkaellon convinced his father to allow a herald to speak on Sanguinius' behalf. Azkaellon gathered ten Sanguinary Guard and had them each draw lots, two of which were marked in blood. Dismissing the eight that did not win, the names of the two remaining Guard, Alatron and Haratial were put in a grail and one was picked randomly. Alatron's name was chosen and in order to keep the identity secret, Azkaellon killed Haratial. Azkaellon then drew a white hot helm in the visage of Sanguinius from a fire and placed it over Alatron's head, forever searing the helm to flesh and ensuring Alatron would forever be The Sanguinor.[3]

The Sanguinor, now known simply as The Herald, served in his role for several years. Later when Sanguinius, Guilliman, and Lion El'Jonson attempted to reach Terra through the Ruinstorm, the Herald attempted to rescue Sanguinius from the clutches of the Daemon Madail on Davin. As Sanguinius battled Madil and was torn between a portal that linked the Materium and the Daemonically corrupted-ship Veritas Ferrum, The Herald took his place. The Herald and Madail fell together into the collapsing portal, and Sanguinius saw his son transform into a golden angelic form as he was consumed by the energies of the Warp.[4]

In the millennia following the end of the Horus Heresy, the Sanguinor would appear upon the battlefield to fight along side their Blood Angels in the times of greatest need. The Sanguinor engages in an eternal battle in the Warp against the Black Angel, growing stronger every time one of the sons of Baal protects the blood of the innocent.[6]

The Sanguinor is armed with golden Artificer Armour with an integral winged Jump Pack[1b], wields a Glaive Encarmine, a two-handed Power Sword and the Red Grail[2]. He also carries with him frag and krak grenades. 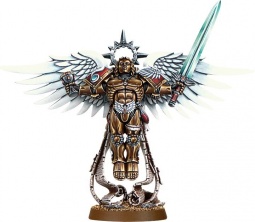