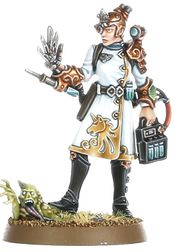 Once a preeminent Adept of the Talassar Sector, after successfully treating the skin rot of a Dothar aristocrat Minst began to have dreams of a maiden trapped in a cage and forced to suffer by eternally contracting and enduring a never-ending strain of diseases. She then became obsessed with the idea of a panacea, a cure that could even heal a god. It was this fixation that caused Minst to neglect her normal duties, and when high princess Curtley Dothar began to show signs of 180 year old lifespan the adept was forced to flee. She then joined Elucia Vhane's Rogue Trader crew aboard the New Dawn in hopes of beginning anew.[2]

Aboard the New Dawn, something spoke to Minst, promising her an innate understanding of all diseases and the cures that could banish them in exchange for sabotaging the Warp Drive.[2]