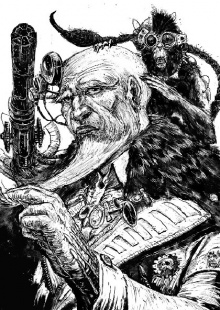 Arkhan Land and Sapien during the Horus Heresy

Sapien was a Psyber-Monkey, or Artificimian, built by Arkhan Land on the basis of historical ledgers. It often rode on Land's shoulders when it accompanied him.[1a]

Land opted not to give it any method of binaric cant or human communication as this would have been a diversion from the descriptions of monkeys provided by the ledgers (although he did build picters into its eyes[1b]). Several scholars argued against the veracity of the archives used by Land, one in particular claiming that monkeys could hang from trees by their tails. Land deemed this ridiculous, Sapien's scorpion-like tail the result of his own theory that monkeys used their tails as lashes and puncturing weapons for delivering venom.[1a]