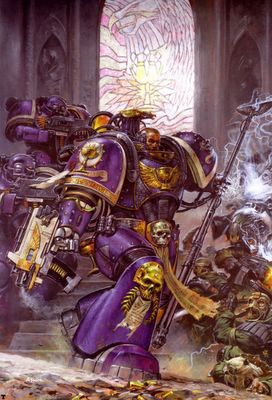 Sarpedon is the current Chapter Master of the Soul Drinkers Renegade Chapter.[1g]

Initially a Librarian of the Chapter; Sarpedon was part of Commander Caeon's forces during the assault on the Van Skorvold Star Fort. The Van Skorvold Cartel was suspected by the Adeptus Administratum of numerous crimes, including trafficking in mutants and illegally-obtained artefacts and the Soul Drinkers agreed to join the taskforce sent to capture the heads of the cartel, after Consul Senioris Chloure intentionally leaked information that the cartel had come into possession of a legendary lost artefact of the chapter - a weapon called the Soulspear.[1a]

During the mission, Caeon was injected with a deadly xeno-toxin by Veritas Van Skorvold.[1a] Before he died, he named Sarpedon as the new commander and charged him with retrieving the Soulspear. Although the Soul Drinkers located the weapon within the Van Skorvold's vaults, they were betrayed by their Adeptus Mechanicus allies, who stole the Soulspear and threatened to destroy the star fort if the Soul Drinkers attempted to retaliate.[1b][1c] However, Sarpedon was contacted by Yser, an escaped prisoner who had been hiding in the bowels of the star fort.[1b] Yser had received a vision from a being he called the Architect of Fate, whom he believed to be a manifestation of the Emperor, that Sarpedon was the Architect's Chosen, the instrument of His will.[1c] Yser showed the Soul Drinkers a disused hangar bay within the star fort that contained a number of starfighters that Sarpedon used to mount an attack on the Mechanicus ordinatus platform before it could fire, seizing control of it. Unfortunately for them, the Soulspear was no longer present with the fleet, as Archmagos Khobotov had already dispatched it to the Forge World of Koden Tertius[1c] and the Soul Drinkers were forced to use the ordinatus to cover their escape from the star fort (which they destroyed in the process).[1d]

The Soul Drinkers attempted to evade the fleet, which had started pursuing them in the wake of the attack, by hiding in an asteroid field known as the Cerberian Field.[1e] Sarpedon's attack on the fleet and the destruction of the Van Skorvold Star Fort were enough for the Ordo Hereticus to declare the Chapter Excommunicate Traitoris for their perceived betrayal against the Imperium.[1f]

Rejecting both the Imperium[1e] (though not the Emperor himself) and the forces of Chaos, Sarpedon followed the words of the Architect of Fate - whom he and his chapter believed to be an aspect of the Emperor manifest, but which was later revealed to be a Daemon Prince allied to Tzeentch called Abraxes. While following this daemon in disguise, Sarpedon developed a dramatic mutation of eight arachnid-like legs.[1g][1h] One of these legs was torn off in a conflict with a Nurglite Champion, and replaced by an augmetic prosthetic.

Sarpedon's legitimacy as chapter master was brought into question during the events portrayed in Chapter War, and is yet to be resolved fully.

Sarpedon was captured by Lysander of the Imperial Fists after helping to save a non-imperial system from the Necrons.

As a Librarian, Sarpedon is a psyker, with his abilities increasing in power following his mutation. He specialized in Telepathy, but notably could only transmit information with very limited ability to receive it.[1b]

Sarpedon is the master of The Hell - this rare psychic talent can manifest psychic images on the battlefield to great effect on unprepared minds.[1a] Due to severe amplification by his mutations, this power can psychically reshape the battlefield perceived by all sides for a short duration.

Sarpedon also wields a force staff made of arunwood.[1d]