"Praise the sun that brings the dawn of our final doom."
- purported last words.[3b] 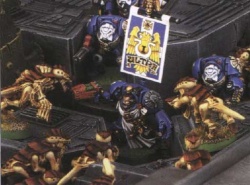 Captain Saul Invictus[3b] commanded the Ultramarines 1st Company when it was destroyed in the defense of the polar fortresses in the Battle for Macragge, during the First Tyrannic War.

Invictus had honed the Company carefully after the losses of the Corinthian Crusade, gradually expanding it with stolid veterans drawn from the rest of the Chapter in accordance with the edicts of the sacred Codex Astartes. In this way, it avoided the failures of many reformed Companies: squad cooperation was flawless and fire discipline superb. Invictus was fanatically committed to ensuring that his battle brothers deserved the respect they gained from the rest of the Chapter and drove them with relentless energy. As First Captain, Invictus also bore the title Regent of Ultramar.[2]

In this role he requested that the First Company be assigned to protecting the two polar fortresses, the vital lynchpins in Macragge's orbital defence network. He judged, rightly as it transpired, that the Tyranids would attempt to make landings at these places to neutralise the defences, opening the door for untold numbers of the creatures to swarm down and infest the planet. The presence of the elite veterans of the 1st Company ensured that the Tyranids suffered unsustainable casualties overrunning the fortresses, delaying the inevitable long enough for Marneus Calgar and the rest of the Chapter to achieve victory in space. Captain Invictus's body was discovered among those of the last stand of the 1st Company in Silo 8 of the northern fortress. Piled twenty yards around the fallen defenders were the corpses of the Tyranids.[1]

In battle, Invictus generally wore Terminator armour, and was armed with a custom Plasma Blaster, a relic weapon of the Great Crusade, along with a power glove.[1]