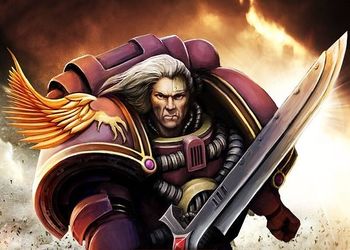 A line officer of the Emperor's Children legion of the Adeptus Astartes, Captain Saul Tarvitz personified all that was good and noble about his Legion. He had the respect of the troops under his command, and was happy with his position within the Legion, requiring only the opportunity to bring honour to his Primarch Fulgrim and the Emperor of Mankind.[2a] He was not well loved by some of the more traditional members of the Legion's command staff, such as Lord Commander Eidolon.[2b]

In the 203rd year of the Great Crusade, Tarvitz was part of the force that landed on the world of One Forty Twenty, which would become known as Murder. The Emperor's Children had responded to a distress call sent by the Blood Angels, who had landed on the planet and been decimated by the Megarachnids who lived there. Tarvitz was part of Eidolon's force that landed on the planet and was nearly wiped out as well.[2a] Tarvitz managed to hold back the Megarachnids and destroy some of their structures, keeping them at bay until further reinforcements from the Luna Wolves could arrive.[2b]

The leader of the Luna Wolves spearhead was Captain Tarik Torgaddon of the 2nd Company. He and Tarvitz immediately bonded, and the two remained close friends. Tarvitz also became close with others of the Luna Wolves, finding them more like himself than most of his Battle-brothers in his own Legion.[2c]

As the level of treachery within Horus and Fulgrim became apparent Tarvitz placed himself in the line of fire by willingly going to Isstvan III. There he and all suspected loyalist members would be betrayed by Horus. Horus ordered the bombardment of the planet, but Tarvitz, along with Garviel Loken and Tarik Torgaddon of the Luna Wolves, managed to turn the loyalist survivors into a cohesive fighting force. This "line officer" turned a planned slaughter into a full-scale battle, confounding the great Primarchs themselves. At the climax of the battle, Tarvitz fought Lucius in single combat after the swordsman had betrayed his own comrades. Tarvitz emerged as the victor in the duel, but Lucius managed to escape. When the traitors made their last assault upon the few remaining loyalists, Tarvitz fought to the last, but eventually fell in the bombardment of the planet, loyal to the very end.[4]

Tarvitz's rank as a captain of the Emperor's Children has been constant throughout the series. However, depending on the book, the company which he is attached to differs. In False Gods, Tarvitz is only described as a captain, with no company assigned. However, in Galaxy In Flames and Flight of the Eisenstein he is mentioned consistently as the First Captain of the Emperor's Children and in Fulgrim that honour is assigned to Julius Kaesoron, with Tarvitz assigned to the 10th Company.[Needs Citation] 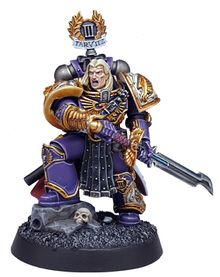