The Sautekh Dynasty is one of the most powerful Necron Dynasties which is currently ruled over by Phaeron Imotekh the Stormlord. 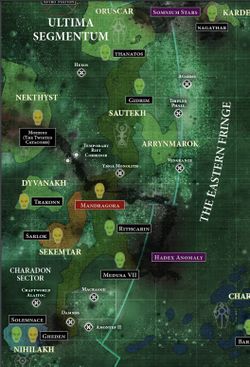 Consisting of eighty Tomb Worlds, its crownworld is Mandragora on the Eastern Fringe.[1b] In the times before the biotransference that transformed the Necrontyr into the Necrons, the Sautekh Dynasty was ranked third most powerful of all the dynasties. Through chance or design, many of the core Sautekh Tomb Worlds survived the Great Sleep. However, chaos ruled its Crownworld of Mandragora and its slumbering Phaeron had succumbed to the ravages of the eons. Members of his royal court engaged in a civil war for the throne, and one of the pretenders awoke the renowned Nemesor Imotekh in search of victory. However, instead of winning the throne for him, Imotekh promptly took control of the Sautekh Dynasty for itself and set it on a path of galactic conquest.[9c]

Today the Sautekh Dynasty is among the most powerful and is quickly becoming a major threat on the Imperium's Eastern Borders.[1a] To the Imperium, the dynasty has become synonymous with the Necrons, and it is erroneously believed by many that they represent the alien race as a whole, with all other dynasties being mere offshoots of the Sautekh.[4]

Its nobility is noted as being the most aggressive and the most eager in attempting a new wave of expansion to restore the Necron race to its former glory.[1a] They are known to frequently enslave non-human worlds.[4] They also frequently fight other Necron Dynasties that refuse to yield before them, though to these foes they show more respect and honor. However, once they are defeated, these Dynasties are brutally assimilated.[9b]

The Karnokh Dynasty were originally members of Sautekh, but this changed after they awoke from the Great Sleep. Upon doing so, they looked at their forms and believed themselves to be cursed revenants trapped in their metal bodies. This led them to declare themselves the Karnokh Dynasty and they now seek to destroy their fellow Necrons, in order to free them from the curse the C'tan placed upon their species.[15]