The Savlar Chem-Dogs are a Penal Legion of the Imperial Guard, composed of some of the most hardened criminals and desperadoes in the Imperium. Recruits are drawn from the prisons on the planet Savlar by the promise to allow them to keep anything they take from the battlefield, as well as the chance to get away from Savlar's highly toxic environment.

The Chem-Dogs were conscripted into the Imperial Guard en masse in order to meet the Imperium's desperate need for troops during the Third War for Armageddon. Originally founded by Judge Callistar to put down an armed uprising on their homeworld, he realised the Chem-Dogs could be made into an effective fighting force with the right motivation. Therefore the Chem-Dogs were given the following directives: they could keep any war loot they took off the enemy, but if they broke the law they would be sent back to Savlar.[1]

Savlar Chem-Dogs excel in fighting in the cramped, noxious battlefields found in Armageddon's Underhives. They are also notorious thieves, scavengers, anarchists and worst, stopping to strip the dead of their valuables in the midst of battle, while many inhale a type of altered gas which puts them into a hyper-aggressive state. For this reason, Chem-Dog regiments include Commissars to watch over them. Chem-Dog regiments also make use of Ogryns and Rough Riders, the latter riding into battle on ungainly "Chem-Beasts" beasts native to Savlar and sometimes forming their own regiments of Chem-Riders.[1][2] 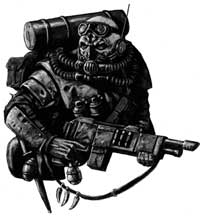 Much of the Chem-Dogs' equipment is more often than not stolen from other Imperial Guard regiments, and many troopers will often carry non-standard gear into battle, ranging from improvised armour and stolen vox-equipment to archaeotech. The standard Savlar-pattern rebreather is a bulky and awkward device with a four-tube canister and filter mask, though many on Armageddon were able to "acquire" the superior Armageddon-pattern, and most are frequently modified to include nitro-chem inhalers for the intake of dangerous hyper-aggression chemicals.[1][2]

Vehicles used by the Chem-Dogs include Sentinels, Hellhounds, and Leman Russ Battle Tanks, including the Demolisher, Vanquisher and Exterminator variants. For artillery the Chem-Dogs make use of Griffons and Basilisks, and prefer Flamers and Heavy Bolters.[1][2]