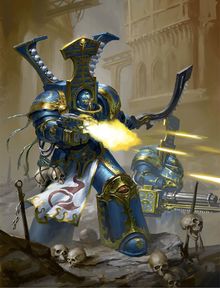 Belonging to the 1st Fellowship of the legion, they were under the command of 1st Fellowship Captain Ahzek Ahriman. Proud and devoted warriors, they were veterans of both battle and the Thousand Sons' psychic discipline system, with no member being of lower cult grade than Philosophus. This meant that each warrior was able to mentally transcend their personal tastes, likes, and dislikes to achieve a form of emotional purity that resulted in warriors both extremely loyal and calm, perfectly willing to obey every order given to them. This practice was commented on by some of the primarchs who witnessed them fight during the Great Crusade; Jaghatai Khan called them "automatons," Leman Russ decried their fighting spirit, while Ferrus Manus called them "robots" - thought in a complimentary way.[1a]

The total number of the Sekhmet is unknown, but the force present with Ahriman on Aghoru numbered eighty-one.[1c] Aghoru was one of the first times that they deployed their newly issued rotary cannons, although they deliberately chose to continue to refer to the weapon by the name of the previous Terminator-issue support cannon, the Reaper. This was due to the numerological significance of the word reaper, which fitted perfectly with the philosophy of the Thousand Sons.[1b] Following the Council of Nikaea, the Scarab Occult Terminators took to cutting a vertical scar through the right lenses of their helmets in their primarch's image.[1d]

After the Heresy and the Rubric of Ahriman, the Scarab Occult Terminators were reduced to mere Rubicae along with most of the Legion.[2] However, unlike ordinary Rubricae, their armour were engraved with arcane formulae and potent spells, so when the Rubric struck them, the energies of these cursed inscriptions blended with remnants of the Terminators' souls, wreathing Scarab Occult Terminators forever in shimmering shields of sorcerous energy, making them resistant to perils of empyric transfer, and therefore ideally suited to teleportation assault.[5] In the 41st millennium, they wage war at the side of Thousand Sons Sorcerers though they still kept the old name - Scarab Occult Terminators.[2]

Scarab Occults Terminators usually equipped with Inferno Combi-Bolters and Power Swords (made in a special Khopesh style). Also except the above mentioned rotary cannon, one of the unit's Scarab Terminators can have a Hellfyre Missile Rack or Heavy Warpflamer.[3b]