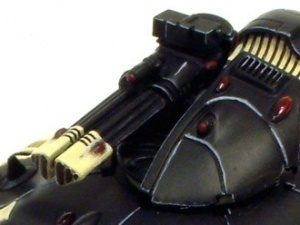 The Scatter Laser is a heavy laser weapon commonly used by the Eldar.[1]

Originally created for War Walkers and Wraithlords, is also acts as a support weapon for Guardian squads, where it is mounted on a Grav Platform. The weapon is comprised of six separate laser chambers which can be fired simultaneously or in bursts, at either the same or different targets, and uses crystalline power cells to store energy. It is similar in some respects to the Imperium's Multi-laser, but far more refined and energy-efficient.[1][2] The Eldar name for this weapon is Sierbahn.[1]