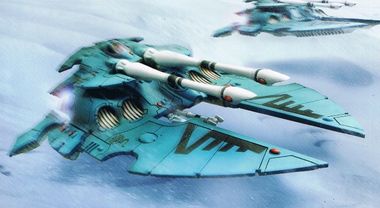 The Scorpion is an Eldar Engine of Vaul, a Super-Heavy Tank which combines the speed and grace of Eldar anti-grav technology with terrifying firepower. The vehicle's namesake in Eldar mythology had a ranging sting attack to lash at enemies before they could get within range, and so too does the Scorpion. Scorpions are used to spearhead armoured assaults and as long-range fire support for raiding forces, where their devastating anti-tank firepower has earned them nicknames among the Imperial Guard like Grave-maker or Death's Sled.[1][2][3]

The Scorpion's primary armament are a pair of massive Pulsars mounted on a traversing turret. These fearsome weapons are a direct threat to Imperial Titans and can slice a Leman Russ Battle Tank in half with a single shot, but even during the most demanding of maneuvers advanced sensory and targeting equipment ensures lethal accuracy. And the Scorpion is incredibly maneuverable despite its size, flying at high speeds, jinxing around enemy fire or popping up from cover for only a brief second to let lose a deadly shot. Among all the Engines of Vaul only the Scorpion poses the ability to move easily about a Craftworld without problem.[2][3]

The armour protecting a Scorpion is unnaturally resistant, capable of deflecting multiple Lascannon blasts.[4] However its main defence besides speed and agility comes in the form of a Titan-grade Holo-field. This mysterious technology refracts the Scorpion's image in the visible spectrum and blinds scanners and other tracking equipment attempting to lock on to the craft. Secondary armament comes in the form of a Bright Lance, Eldar Missile Launcher, Scatter Laser, or Starcannon, while additional upgrades come in the form of Star Engines and Vectored Engines.[2][3]