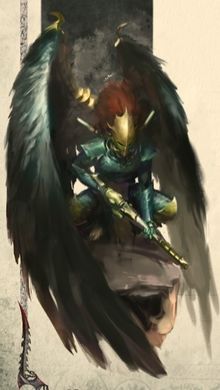 Scourges are a type of Dark Eldar warrior.

A Dark Eldar Scourge is a particularly rich and daring individual who has submitted themself to a haemonculus's attention - having their bones hollowed out, powerful wings grafted to their frame, and new bands of muscle and adrenaline dispensers added to their torso so that they are capable of true flight.[2a] Some Scourges become so far removed from their humanity that they will grow quills and feathers from their body and change their skull into an avian appearance.[3]

Scourges dwell within the upper spires of Commorragh and are an intrinsic part of life in the city. They act not only as warriors but also spies and messengers for various Archons. Their messages are often imbued with a poison whose antidote is only in the possession of the recipient.[3]

Unlike other armies, who have assault-oriented jump-troops, Scourges carry heavy weapons into battle, often employed for hit-and-run tactics against vehicles and heavy infantry. A scourge squad leader is known as a Solarite[2a] and represents the most veteran and far-removed from their humanity amongst their kind.[3]