The Scouring of Gnosis was an Eldar invasion of the Imperial World of Gnosis Prime.

In 786.M41, Gnosis Prime was subjected to an invasion by the Saim-Hann Craftworld Eldar. Despite the fact that the Imperial population of Gnosis Prime had settled some 1,200 years previous, the Eldar Autarch Eliac Zephyrblade gave but a single day for the Imperial inhabitants to evacuate. The Planetary Governor, Ulyx, did not take the ultimatum seriously and was confident not only in the strong defensive network of his world (known as the Ulyxis Line) but also the small size of the Eldar fleet orbiting above.[Needs Citation]

Moreover, the Gnosis PDF was also reinforced by Imperial Guard Regiments from Valhalla and Cadia. As a result of this overconfidence and the impossibility of the Eldar ultimatum, Governor Ulyx refused the offer.[1]

When it came, the Eldar invasion was swift and merciless and consisted of forces not only from Saim-Hann but also Biel-Tan.[1b] The Eldar forces converged upon every Industrial Complex, isolating and swiftly destroying each. The jetbikes and grav-tanks of the Eldar made planetfall far out to sea and bypassed the much-vaunted Ulyxis Line. Trying to intercept the Eldar advance, columns of Imperial troops and tanks left their defenses only to find that the Eldar had already redeployed to assault another Hive complex. As confusion and anarchy reigned among Imperial forces additional Aspect Warriors of Saim-Hann emerged from Webway portals and attacked the nearby Hives. The Eldar fell upon each Hive with a terrible fury and millions were slaughtered as the industrial complexes were set aflame.[1] With the industrial lifeblood of the world now cut off, the world of Gnosis Prime was doomed to a slow and painful death at the hands of not only the Craftworld Eldar but also arriving waves of Dark Eldar pirates.[1]

The Space Wolves under Logan Grimnar arrived after the planet had been all but destroyed. Their trip in the Warp had gone longer than expected, and more than a year had past in the Materium. Deciding that if he could not save the people of Gnosis Prime then he would at least avenge them, the Wolf Lord ordered the attack. As Logan Grimnar’s fleet sailed toward the system’s core worlds, he detected the first faint vox cries for help from Gnosis Secundus. Having crippled and starved Gnosis Prime, the Saim-Hann host had moved on to Gnosis Secundus and its small garrison. Grimnar realized that there might yet be Imperial citizens to save.[2]

Battling the Eldar across the Gnosis System, Grimnar was able to defeat the Eldar on Gnosis Secundus, forcing Zephyrblade to retreat. The Autarch felt great frustration for having underestimated human foes.[2] 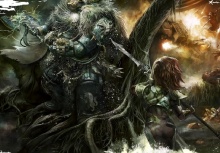