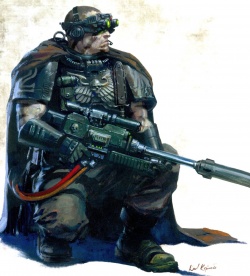 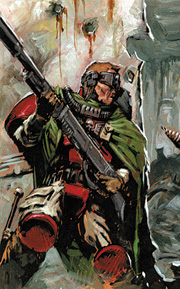 As part of a Scout Squad, a Scout enters combat for the first time as a skirmisher or infiltrator. Relying on stealth rather than brute force, Scouts slip behind enemy lines, gather intelligence, destroy strategic targets, and capture or assassinate key enemy commanders, then fade away before the enemy has had a chance to react[1a]. Because of their speed and stealth, Scout Squads are often assigned to boarding actions against Tyranid Hive Ships or search-and-destroy missions against key synapse creatures that direct the rest of the Hive Mind. For these missions, their armament often includes Heavy Bolters loaded with Hellfire rounds[1a]. During the final stage of their training, Scouts are trained in the use of Bikes, performing a faster-moving version of the reconnaissance and skirmish roles they fulfill on foot[1b].

A Scout squad will be equipped according to its designated tactical role, although ordinarily the entire squad will carry bolt pistols and frag and krak grenades, and at least one member will carry an auspex for information gathering[Needs Citation]. Those who fight alongside Tactical squads will likely be armed with bolters or shotguns. Scout squads specialising in close combat will instead be equipped with combat knives. Scouts serving as long-range fire support carry sniper rifles, missile launchers, and/or heavy bolters[1g]. They may be equipped with combat webbing in order to effectively carry their gear, and may also carry specialised or exotic equipment like grapnels or grav chutes[Needs Citation].

Space Wolves employ Wolf Scout squads instead; as they are veterans, rather than neophytes, they are trained in a wider array of weaponry and so may be found carrying alternative equipment to the scouts of more codex-compliant chapters.