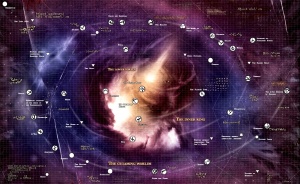 The Screaming Vortex is one of two massive Warp Storms which separate the Calixis Sector of the Imperium from the Koronus Expanse [1]. Within the storm, several worlds are known to the Chaos renegades who reside in the region.

The Screaming Vortex encompasses an area much larger than the original grouping of worlds it formed around, swallowing many additional systems and even pulling additional systems into itself via realspace disruption. It also has varied in size throughout its past, the world of Saint Annard's Penance was thought to be held within the Vortex for a time, though it currently sits in Imperial hands at the edge of the Malfian Sub-Sector. As with many Warpstorms, relative time and space within the Screaming Vortex are highly mutable as the laws of physics are constantly warped by the influence of the Immaterium. The Imperium remains largely ignorant of the interior of the Vortex, and the various powers within are largely preoccupied trying to dominate one another or otherwise surviv; but if they were to unite even for a short time, they would make a powerful force against the Imperium. Because of the difficulty of traversing the Vortex, and the tides of the storm constantly shift the relative positions of planetary systems therein, conquest is a difficult proposition, and a given warlord will have considerable difficulty conquering more than a handful of worlds at a time or for a meaningful length of time. Aside from small-scale wars and developing war materiel, slavery and piracy are major enterprises within the Vortex.[2]

While the astrography of the Screaming Vortex makes it very difficult to map and explore, it has many well known worlds that are in a relatively stable position within portions of the Vortex, that it can be broadly divided into three zones: the Gloaming Worlds, the Inner Ring, and the Lower Vortex, with several other small, yet important locations aside.

The 13th Station of Passage

A hidden splinter route from the Maw formed by the Maw and the Screaming Vortex disrupting each other, the 13th Station of Passage is the safest and most stable, and thus the most frequented pathway into the Calixis Sector and Koronus Expanse, and back into the Screaming Vortex. Though it requires an acts of obeisance and sacrifice, testified by the debris field of frozen corpses orbiting the passage. Reputedly discovered by the Haarlock or Winterscale Rogue Trader lines, though there's no corroborating evidence for either.[2]

The worlds on the outer section of the vortex are known as the Gloaming Worlds. The most daring Navigators who would look into the Vortex would glimpse only a few of these worlds.[2] They include:

Also called the Giant's Stride, the region known as Harrowed Space is one of several dangerous warp currents that exist within the Vortex. Many try to use it to navigate the throughout the different tiers of the Vortex, possibly even out of it, most journeys are ill-fated from the start.

The Tyrant Star is an enigmatic object, or possibly an entity, that appears as a perfectly eclipsed sun, often overtaking a planet's parent star, and is an omen, or rather a bringer of impending evil. It occasionally plagues the worlds of the Screaming Vortex and the Calixis sector. Strange and deadly happenings occur when it appears in the sky, often leading to the deaths of millions as it appears. The Inquisitors of the Calixis Sector believe it to be linked to Chaos, though the most learned seers and scholars of the damned of the Screaming Vortex struggle to understand the nature of the Tyrant Star.[2]

The region known as the Ragged Helix is the line of demarcation into the Inner Ring, where the relative stability of the Gloaming Worlds gives way to the heavy influence of the warp within the Inner Ring. The Ragged Helix is a chain of asteroids that hold their own atmospheres, and impossibly connected by bridges. It's not determined whether this occurs due to forgotten xenos technology within the area, or due to the influence of the Warp. It's home to numerous workshops and shipyards of many techpriests of the Dark Mechanicus. More infamously, the Ragged Helix is home to the Pirate Princes that plague the Screaming Vortex.[2]

Within the inner ring, hybrid worlds of daemonic and physical nature are the norm. Many are believed to be former Eldar Maiden Worlds. They include:

All the worlds at the deepest point of the screaming vortex are Daemon Worlds: