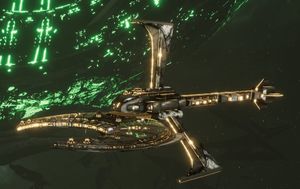 They appear to be more common than the larger Cairn Class Tomb Ships and have so far been part of every encounter with Imperial ships. There are only two classes of Harvest ship, the Reaper and Harvester[3] with the primary difference being the addition of a Sepulchre weapons system on the former. The standard armament of both vessels include Lightning Arc and Particle Whip arrays.[3]

The ships appear lightly built compared to Imperial vessels, but this is misleading as they are particularly difficult to destroy. There are only three known instances of the disabling of a Harvest ship, and in each case the firepower of several capital ships was required. They are, with their armament, the equal of all but the largest of the Imperial vessels.