Scythes of the Emperor

The Scythes of the Emperor (or Emperor's Scythes) are a Codex Chapter of the Adeptus Astartes.[1] The advance of Hive Fleet Kraken overwhelmed the Chapter's home world of Sotha and virtually destroyed the Chapter for many years[4]. However in the Age of the Dark Imperium they have experienced a rebirth.[12a]

The Scythes of the Emperor's history originated during the Horus Heresy, where the 199th "Aegida" company of the Ultramarines fought bravely against the Night Lords in the Battle of Sotha. Subsequently, Roboute Guilliman honoured the company with the emblem of two crossed scythes, representing their defence of the farmers of Sotha.[14]

After the Heresy and the Second Founding, the Aegida Company was maintained as a phantom 11th Company under the command of Captain Oberdeii, in defiance of Guilliman's own Codex Astartes. When Rogal Dorn initiated the Third Founding nearly a millennium later, Oberdeii was the last surviving member of the company. Nevertheless, the Ultramarines' Chapter Master, Tigris Decon, wished to remove the evidence of Guilliman's 'heresy', sending Chaplain Segas and Brother Wenlocke to offer Oberdeii the choice of being reassigned to the 5th Company or continuing to guard the Pharos by becoming Master of a new 'Aegida Chapter'. Oberdeii reluctantly agreed to found a new Chapter, but chose to name them the Scythes of the Emperor. In addition to Chaplain Segas and Brother Wenlocke, seventy-two veterans of the Orlan Conquest were assigned to the new Chapter.[16]

The Corinth Crusade was led by Marneus Calgar, with forces from the Ultramarines, Angels of Absolution, Lamenters, Silver Skulls, Scythes of the Emperor and Marines Errant as well as more than fifty Imperial Guard Regiments. They fought against the Ork hordes of Waaagh! Skargor, in the Corinth system within the Ork empire of Charadon.[8]

The successful crusade not only crushed Waaagh! Skargor but also delayed any further Ork incursions from Charadon for more than thirty years.[8]

It was in the years following the Damocles Crusade against the Tau in M41.742 the Scythes of the Emperor would come to the forefront of Eastern Fringe warfare. The Scythes led the first landing onto Tau territory, the world of Sy'L'Kell. After establishing the landing zone. The Brimlock Dragoons moved on to expand the Imperial foothold. The Dragoons were nearly destroyed by a Tau ambush which the Scythes, leading Imperial Storm Troopers, broke through averting a near disaster. After claiming Sy'L'Kell, the Crusade moved to cross the Damocles Gulf. After a brutal first fleet engagement with the Tau, the Imperials landed on the a major Tau world of Dal'Yth Prime. Joining members of the venerated Ultramarines and Iron Hands Chapters, the Scythes were part of several spearhead assaults and kept up constant night patrols against Tau infiltrators during the months long fighting.[Needs Citation]

With news of Hivefleet Behemoth bearing down upon the Eastern fringe and the stalemate between the two sides, the Crusade withdrew, though a mutual respect between both sides had been forged.[Needs Citation] 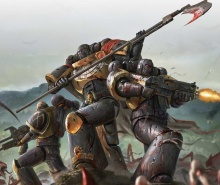 Among the planets overwhelmed by the locust-tide of Tyranid hive fleet Kraken was the chapter's homeworld Sotha. Even for a well-defended Chapter planet, there was little hope against such vast numbers and relentless hunger, and in the end due to Genestealer Cult uprisings[21e] the Chapter brethren were killed in the last stand on the planet. All brethren were presumed destroyed, but a small number had escaped in order to preserve their chapter and gene-seed.[Needs Citation]Sotha, along with so many other planets in the inexorable advance of the Kraken, was reduced to the state of an asteroid by the Tyranid swarms. Two hundred Marines broke through the Tyranid assault. With much of the region overwhelmed by the Tyranids, there was nowhere to escape. The last of the Scythes evacuated to the Miral System eventually landed on the death world of Miral.[22a][22b]

Somewhere on the surface of this planet, a huge rocky outcrop called the Giant's Coffin rose from the jungle. The surviving forces of the Scythes prepared to make this their final stronghold. The Giant's Coffin was a tremendous natural citadel whose steep cliffs would slow the invaders and the rocky promontories would provide excellent firing positions for heavy weapons.[3] Although the defenses of the Scythes were strong they were still overwhelmed. Their Chapter Master Thorcyra met his end on Miral and the Scythes were forced to withdraw.[5] The fate of Miral is unknown, although little more than a Company of the Scythes of the Emperor escaped with their lives.[2]

Captain Thrasius became the new Chapter Master and planned a series of hit and run attacks against the Tyranids. This pattern of defense and retreat continued until they received word that Hive Fleet Kraken's unstoppable advance had finally been staggered by the Ultramarines on Ichar IV. At that time, the Scythes were engaged in the preparation of defences on Bosphor, and were bitterly disappointed not to have been present when that first great victory was won. Thereafter, Thrasius's strategy became principally concerned with the preservation of his Chapter and the salvaging of as much material as possible from the devastation wrought by the Tyranids.[5]

The Scythes no longer have any Codex-approved Terminator squads, since they have only three remaining suits of Terminator armour. Forge Master Sebastion is known to have acquired a fourth partial suit, and is restoring it to combat-readiness.[11]

Since the destruction of their homeworld, the Scythes have become a secretive Chapter. This is because many of their Battle-Brothers were infected with the Genestealer's Kiss during the invasion. The Astartes were strong enough to resist the calls of the Hive Mind, but wore psychic dampening hoods to lessen its power.[21c]

At the beginning of 999.M41 it is understood that the Scythes of the Emperor were still attempting to rebuild, and seek vengeance upon the Tyranid race.[12b] In 970999.M41 the Scythes unexpectedly re-emerged from the shadow of Hive Fleet Kraken and announced that their Chapter would be "born anew".[12a]

A force of Scythes later accompanied Belisarius Cawl to Sotha to study the Pharos, but were beset by a force of Genestealer Cultists that had infiltrated their Chapter Serfs. During the fight Chapter Master Thrasius died slaying the same Genestealer Patriarch that had originally led the assault on Sotha. All the remaining Scythes Firstborn died with him in the battle.[21e]

The previously abandoned orbital station of Scythes of Emperor above Sotha Aegida was rebuilt and assigned as their fortress-monastery until the planet would be fully revived. From there Scythes of Emperor will fulfill their ancient obligations of honour and watch the eastern marches of Greater Ultramar for various and numerous threats.[21f]

The Scythes of the Emperor did not restrict the recruitment of new Aspirants to their homeworld; even before the loss of Sotha, the Chapter maintained bastions on a number of Imperial worlds, which were used for resupply along with recruiting Marines. Planets known to feature such outposts include Miral Prime[22b] (which was consumed by the tyranids not long after they attacked Sotha), Brakur IV and Beremin.[19] 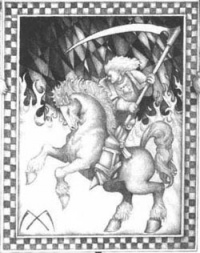 Chapter banner of the Emperor's Scythes[24]

The Power Armour worn by the Scythes of the Emperor is black, with a yellow breastplate and backpack. The Chapter's symbol is a pair of yellow crossed scythes on a black background.[1]

Many of the Company Banners of the Scythes, along with the Chapter Standard, feature an armoured warrior clad in the Chapter's colours astride a horse. This is regarded by some as an unusual choice of animal, as horses are not native to Sotha and there are no records of any Scythes ever riding into battle on one. Each Company Standard features a legendary horse from the tales told by Oberdeii.[22f] Amongst the horses featured are Abrax and Conabos.[18][22f]

Prior to the Fall of Sotha, the Chapter fleet numbered over a hundred vessels in total.[Note 1] Following Kraken's attack, and the Chapter's evacuation to the Miral System, only twenty-six ships remained, many heavily damaged.[22a][22b]

Main article: Known Members of the Scythes of the Emperor 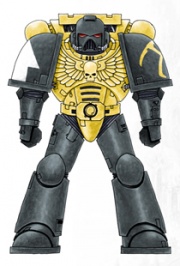 Scythes of the Emperor Firstborn[1]

Parts of the Scythes' background are inspired by the Thracian civilisation - in particular their use of polearms called falces.