The Second Agrellan Campaign, also known as the Cleansing of Agrellan or the Second Battle of Mu'Gulath Bay, was a major Imperial offensive launched against the Tau Empire in the closing years of M41.[1]

Following the Tau victory in the Prefectia Campaign, half of the triumphant Tau forces under Ethereal Supreme Aun'va himself returned to the Sept of Mu'gulath Bay (previously known as Agrellan before it was captured by the Tau) for refitting and redeployment. However it soon became apparent that the Imperium had simply shrugged off the loss of Prefectia, instead choosing to send a massive retribution fleet to Mu'gulath Bay, determined to retake it.[1a]

The Imperial naval contingent of Task Force Retribution was led by the 478th Battlefleet of Ultima Segmentum under Admiral Hawke. After reaching Mu'gulath's bay orbit, Hawke determined that the orbital defenses were too heavy to begin ground forces. Thus he called upon Space Marines of the Raven Guard under newly appointed Chapter Master Kayvaan Shrike to clear the orbital platforms. Shrike was successful, setting off Melta Bombs in the largest platforms plasma reactors and creating a devastating chain reaction.[1a]

The invasion took the Tau by surprise, who were shocked by the scale and speed of the Human assault. A massive orbital battle took place as Shadowsun ordered Mu'gulath Bay's surface batteries to open fire. The Imperial fleet took heavy loses, but after days of battle secured the space above Mu'gulath Bay and pounded the weapons batteries into silence with orbital bombardment. It was then that Imperial Navy fighters and Space Marine Drop Pods launched an atmospheric assault. Shrike correctly predicated that Shadowsun would attempt to destroy incoming Imperial troop transports with her remaining hidden Battleships, and the Tau deception was blocked by Raven Guard Attack Craft. Imperial Guard forces under Cadian Lord General Troskzer began to land massive amounts of forces on Agrellan, protected by screens of Raven Guard Scouts and White Scars. Troskzer and Shrike deployed forces at three primary locations on the planet. These three fronts, the central, eastern, and western spearheads, would converge at the largest Tau installation at the old capital-Hive, Agrellan Prime. While Troskzer commanded the operation in space aboard the Battleship Indomitable, Colonel Starkzahn would lead from the front.[1b]

Starkzahn led the Western Front after securing their landing sites, pushing across Agrellan's desert plains. The Tau did not give full resistance, instead using Air Caste fighters in strafing runs and hit-and-run tactics using Hammerhead Gunships. Imperial morale was maintained thanked to Thunderhawk support from the Raven Guard.[1d] 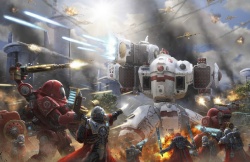 However at were ambushed by Tau forces under Fireblade Rhu'var. The Tau armored contingent was led by the legendary tank ace Longstrike, who wreaked a bloody havoc on Imperial armor with a Hammerhead Gunship from its concealed position. During the fight he clashed with Knight Commander Pask, himself a renowned tank commander in the Imperium. However after dealing enough damage, the Tau withdrew as quickly as they had appeared but were blocked by the sudden appearance of a Cadian Super Heavy Tank contingent led by Pask himself. Shadowsun deployed reinforcements, dropping in Battlesuit teams from Orcas and blunting the Imperial counterattack.[1e]

After the battle at the Black Ruins, the Imperial Western Spearhead began its move on the largest Tau military complex on Agrellan. A Space Marine Drop Pod assault threw the first Tau defensive line into disarray, while Imperial Guard and Skitarii elements moved on the second and third. Stubborn and resilient Skitarii forces, backed by Cybernetica robots, moved forward while Imperial Guard followed from behind. After a vicious fight that saw heavy casualties for both sides, the Imperials managed to clear the complex with Sicarian Infiltrators. It was then that the Mechanicum Holy Requisitioner arrived at the battlefield, and it was then that Shadowsun sprung her trap. However the assault was clumsy and hastily assembled, and it became apparent that the Imperials would endure the assault. It was then that the skies turned red.[1f] 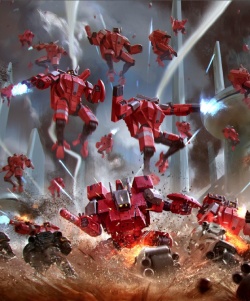 Shocking all sides, Commander Farsight himself appeared in the fray, followed by The Eight and leading a massive Mont'ka assault on the Imperials. Colonel Starkzahn realized victory had been snatched from his grasp and attempted a withdrawal, moving to Blackfossil Ridge amid a heavy supporting bombardment. They were joined by the Space Marines, who soon all evacuated by Thunderhawk save the White Scars contingent under Kor'sarro Khan.[1f]

A vicious battle erupted all across Blackfossil Ridge as the Tau caught up with the retreating Imperials. Tau momentum was stalled in the face of heavy Ogryn assaults but Farsight and the Eight managed to break the counterattack. As Starkzahn prepared to make his final stand, Imperial armored contingents under Pask and Skitarii cohorts appeared as reinforcements. The Tau would have been bested, but Stormsurge Battlesuits, Longstrike, and Farsight managed to turn the tide.[1f]

It was then that Imperial reinforcements arrived from the south, further outnumbering the Tau. The Tau switched to hit-and-run strikes, pinning down the Imperials. Commander Shadowsun came to the aid of Farsight, deploying her own forces against incoming Imperial Knights led by Tybalt of House Terryn and the Obsidian Knight. Shadowsun allowed both her own Tau and Farsight troops to withdraw in good order.[1g]

Hour of the Executioner

It was then that the Imperials revealed their trump card: an Execution Force of the Officio Assassinorum waiting in high orbit. Even if Agrellan could not be liberated from the xenos, the Imperials were determined that the Tau would lose their best and brightest leaders. Meanwhile, the Tau continued to make hit-and-run attacks, the Space Marines conducted dozens of sorties destroying vital cities and engaging in a running war with Pathfinders, while the Imperial Guard under Troskzer were driving on the Tau capital on the ruins of Agrellan Prime.[1h]

The assault on the city of Lo'vasht'au as the Tau called it began with a Space Marine drop pod assault under Shrike and Kor'sarro Khan. The Space Marines endured vicious fighting, attempting to fight off Tau pathfinder and Drone Sniper team ambushes. It was then that the main Imperial assault began, commenced with a thundering artillery bombardment. They were followed by rows of infantry and armor, advancing beneath a storm that made communications difficult. Imperial Super-Heavy Tanks and Knights were the last wave, forming the Imperium's own Killing blow. Lord Tybalt and House Terryn struck in the thickest of the fighting, battling Tau Stormsurge Battlesuits.[1h] 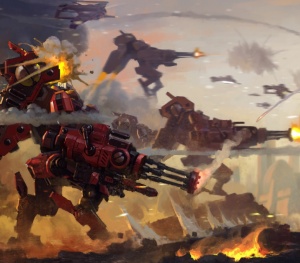 As the fighting raged, Tau Pathfinders began being picked off one by one. The Assassin Execution Force had arrived. They were followed by Darkstrider and a force of elite Pathfinders, determined to prevent the assassins from carrying out their mission. Nonetheless a Vindicare Assassin was able to get into position and take a shot at Farsight, who was saved thanks to the effort of Commander Bravestorm. As chaos gripped the Tau command, Darkstrider managed to take down the Vindicare, losing all of his Pathfinders in the process. Farsight then was assaulted by an Eversor Assassin who took down several Crisis Battlesuits. Ob'lotai 9-0 engaged the crazed warrior, becoming badly injured but allowing the rest of the Eight to take down the Eversor.[1i]

Meanwhile on the battlefield, Shadowsun managed to rally Tau forces and wither wave after wave of Imperial assaults. However while in her mobile command post Shadowsun was beset by a Callidus Assassin disguised as the Ethereal Aun'Kar, Shadowsun was wounded, but with the aid of a force of Pathfinder bodyguards managed to take down the shapeshifter. The threat was not alleviated for the Tau leadership however, as Ethereal Supreme Aun'va, who had become trapped on Mu'gulath Bay, was assaulted by a sinister Culexus Assassin in his hidden bunker in the ruins of Agrellan Prime. The Culexus mentally overwhelmed all of Aun'va's bodyguards before pursuing and killing the Supreme Leader of the Tau Empire.[1j]

At the battle, Imperial losses had been grievous and the Space Marines were now evacuating. Far from cowardice, the White Scars 3rd Company was ordered to immediately return to Chogoris, which was now besieged by the Red Corsairs. Shortly after Troskzer had been replaced and commanded by a new Lord General who ordered an immediate withdrawal from Agrellan. During the withdrawal effort, Starkzahn was wounded and the storms hindering the Imperial advance mysteriously subsided. The Imperials withered brutal ambushes and air attacks during their withdrawal operation though the majority managed to make it off world. As a final spiteful act, Admiral Hawke performed Exterminatus on Agrellan once the evacuation was complete. Millions of Tau along with those humans left behind burned as a specialized Imperial Torpedo set the planet's gaseous northern hemisphere aflame.[1j]

As the Imperials withdrew back into the Warp, Commander Shadowsun was aboard a Tau starship recovering from her earlier wounds. As for Farsight, he and his forces had vanished during the closing stages of the battle. Shadowsun was ordered to apprehend Farsight by the Ethereal Council, a task she reluctantly but loyally would carry out. In truth, Shadowsun had leaked the information to Farsight beforehand to give his former ally a headstart in his escape. As for Farsight, he became determined to save the world of T'lasla from the hordes of Hive Fleet Leviathan.[1j]

The Mechanicus' purge of the space surrounding Mu'Gulath Bay had dire strategic consequences of the Tau. Their primary route to continue the Third Sphere of Expansion was now closed, forcing them to launch a New Sphere through unconventional means.[2]