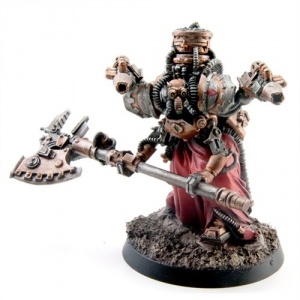 Secutors are members of the Auxilia Myrmidon of the Adeptus Mechanicus that devote themselves to the art of warfare with a fervour other tech-priests normally reserve for tinkering with ancient technology. To them, the protection of the technological mysteries of the Machine Cult, from those who would misuse them, is a far greater concern than anything else, including human lives and the other concerns of the Mechanicus.[1a]

Huge creatures of steel, bedecked in powerful and sometimes ancient weaponry, they embody the military potential of the Mechanicus in the arts of siege warfare, destruction and death. Secutors often have extensive martial enhancements such as pistol-armed mechadendrites, brutal close combat weapons and the special machinator array that vastly enhances their bulk, armours up their internal organs and increases the ability for weapon systems to interface with their implants. A primary example is the Auxilia Myrmidon, a defense force of tech-priests traveling with technological crusades of the Mechanicus to protect their holdings on the worlds they settle. Another example is the Divine Light of Sollex, a cult of martial tech-priests unique to the Calixis Sector.[1a]

Some tech-priests become secutors because of a hatred of tech-heretics and love of war and conflict, while others are fascinated by the intellectual challenges of warfare, strategy or perhaps a love of weaponsmithing. Others, of course, merely use the path of the Secutor as a means to further their political power, not minding extensive grafts of siege weaponry to their body if it means moving up within the Mechanicus. At the behest at their Archmagos masters of the Forge World from which they hail, Secutors are sent along with explorator fleets, Imperial Guard regiments and Rogue Traders to retrieve ancient technology, often where such retrieval is made extremely dangerous by the presence of xenos or Chaos forces, and the martial skill of a Secutor is needed to ensure the protection of tech-treasures.[1b]