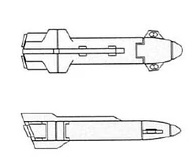 Seeker Missiles are a Tau missile system similar in concept to the Imperial Hunter-killer Missile.

Besides a powerful warhead and jet engines, each missile incorporates a Seeker array, a collection of diode receivers, which are highly sensitive to Markerlight energy beams.[2] Each beam has its own unique pulse pattern, which is transmitted by the Markerlight's operator to the missile's central control system. Once launched, the missile will only seek out the correct Markerlight pulse pattern, which is reflected off the target's surface and picked up by the diode array.[2] The guidance system will adjust the missile's maneuvering fins to ensure the correct pulse pattern is being followed which, combined with the missile's speed, allows for extreme accuracy even at long ranges.[3] Seeker missiles even take evasive action to avoid point-defense weapons.[5]

Most vehicles within the Tau motor pool can carry a maximum of two Seeker missiles, although the Sky Ray is notable for carrying six. However, unless the vehicle itself carries a Markerlight, they have no control over the missiles, and can only be launched and aimed by Tau so equipped.[1] As well, without a Markerlight beam to guide them, Seeker Missiles are restricted to dumb-fire mode.[4]