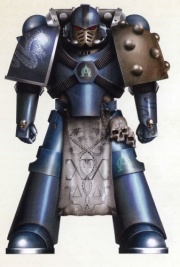 Seeker Space Marines were a type of specialist Space Marine infantry squad used during the Great Crusade and Horus Heresy. Their principal role on the battlefield was to identify an enemy command structure and destroy them with well-placed surgical strikes while the battle rages. It is said that the Alpha Legion first perfected these specialists and with the Emperor's approval spread them to the rest of the Legio Astartes.[1]

These troops are chosen on the basis of pure merit, usually those in a Seeker squad are the best shots of their respective Companies. To aid with their kill, they are usually equipped with specialized Bolter ammunition to better deal with their chosen victims.[1]