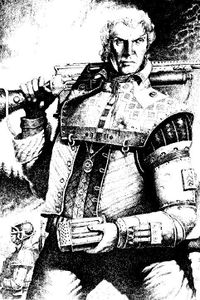 The Sensei are the true immortal sons of the Emperor. who wander the galaxy as heroes and champions.[1][2]

The Sensei have adapted to living in hiding within the ranks of humanity, while ignorant of their true heritage. Over the millenia they have been villified as 'witches' and 'devils' for their immortality.[1] The Sensei are heroes who wander the galaxy, sometimes in the company of bands of other powerful heroes.[2] In the age of the Imperium, few other than the Sensei themselves and the Illuminati are aware of their existence, other than as folk tales of the Captain Eternal or the Wandering Inquisitor.[1]

Only when a Sensei encounters, or is drawn to, another Sensei does the truth emerge and they are taught new abilities. They may tap into warpspace to channel energy for combat, sense daemons or disturbances in the warp, and the power to mask their presence from psychics. Trained Sensei are inducted into the Brotherhood and prepare for the final battle against Chaos. Some Sensei may flee to join the forces of Chaos and become Grey Sensei, becoming amongst the cruelest of dark servants.[1]

While a Sensei can be killed, they do not age. In addition they possess amazing powers of recovery. They are protected from the powers of Chaos and the warp, but they may join the forces of Chaos[1],[2]. A Sensei cannot experience hate, bitterness, or irrational anger, because these are emotions caused by the disharmony of the Chaos powers. The Sensei are invisible to the Chaos powers and their daemons and possess no emotions that are embodied by the Chaos powers.[2]

The Sensei are rewarded with powers from the Star Child in the same way a Champion of Chaos may be rewarded by a Chaos God.[2].

The Sensei and the Star Child

Whereas the Chaos Gods possess their own champions, the Sensei act as the champions of the Star Child, the immortal soul of the Emperor and humanity. Every Sensei is born with the Mark of the Star Child, allowing them to draw upon the energy of the Star Child.[2] The Star Child may reward the Sensei with a number of different abilities and protections, such as the power to slay daemons, sword mastery, marksmanship, endurance, and mastery of disguise amongst other rewards.[2]

In time, a Sensei may achieve Apotheosis, being drawn through the warp to commune with the Star Child to become one of its special servants, known as a Sensei Master. A Sensei Master is the Star Child's equivalent of a Chaos God's Daemon Prince. However, a Sensei's individuality and mind is consumed, and they may return to the material universe unnoticed, even visiting mortal friends if in danger.[2]

The Sensei will sometimes be in the company of a select band of other powerful heroes. To the Inquisition, the Sensei are dangerous psykers and mutants, and them and their bands risk capture and death at the hands of the Inquisition or other Imperial forces. While the Sensei are not enemies of the Imperium in and of itself, they are enemies of oppression, often giving them popular support.[2]

These Adventurer Bands may hide in underground caverns, deep within cities, or lead freedom fighters from the forests and mountains. Others work as pirates, robbing vessels as champions against the rich and for the poor. These bands see themselves as the enemies of both Chaos and repression.[2]

Adventurer bands will consist of at least one Sensei, rebel human leaders and psykers, abhumans such as Squat rebel leaders or Ogryns from beyond the Imperium, Navigators, and even lone Eldar who have left their Craftworld. The Sensei generally possess strong emotional attachments to their comrades, and will return to assist them even after apotheosis with the Star Child.[2]

The Sensei and the Inquisition

In 3928997.M41, the Inquisition encountered a group of self-proclaimed Sensei on the world of Levilnor IV, leading a cult known as the Temple of the Star Child (also known for short as the Star Cult). The temple worshipped the Emperor in the form of the Star Child. While the investigating Inquisitor Fortez considered the possibility that they may in fact have been the children of the Emperor, he rejected the notion due to their association with rebel humans, abhumans and Eldar.[3]

During the Inquisition War, the Dark Master of the Ordo Malleus has established the Eternity Project, whose goal is to hunt down the immortal mutants.[6b]

The Sensei of the Temple followed the belief of achieving Apotheosis and be granted eternal life and everlasting power by the Star Child. This has led the Inquisition to believe that the cult is similar to the Tzeentchian Thrandos cult, and that the Great Sorcerer was perhaps masquerading as the Star Child. The cult on Levilnor IV was exterminated by the Salamanders Space Marine Chapter, but there remain other Sensei which did not travel to Levilnor IV.[3]

The Sensei and the Illuminati

The Illuminati's goal is to renew the Emperor at the moment his body or mind finally fail. To achieve their ends, they gather Sensei in order to sacrifice them at the pivotal moment in which the Emperor is to fall. The Sensei who join the Illuminati are fooled into believing they will participate in the final battle against Chaos, with the Illuminati even helping to establish a Long Watch of Sensei Knights who will participate in the 'last battle against Chaos'.[1]

The Sensei and Other Factions

Besides their Adventurer Bands, the Sensei may ally with other races and factions as part of their greater effort against the forces of Chaos. These include the Eldar, and especially the Harlequins, who wish to closely observe the cause of the Star Child. They may be joined by defectors from the Tau Empire who have abandoned the cause of the Greater Good and view the Sensei and Ronin as the only true hope for a radiant future. Human allies may include the ranks of the Adeptus Astartes, Sisters of Battle, Imperial Guard, and abhumans such as Ogryn, Ratlings, and Squats.[5]