A Sentinel firing a Lascannon[2]

A Sentinel is a bipedal, all-terrain walker used by the Imperial Guard for a number of missions including reconnaissance and search-and-destroy.[4]

The Sentinel achieves movement with a pair of articulated legs, which allow for both maneuverability in dense environments and bursts of speed on open terrain.[4] They are fitted with advanced gyro-stabilizers to improve their balance, and their powerplants include noise-reduction technology for stealthy operation.[4] Though it can't move with the speed of the wheeled vehicle, the Sentinel can run - much like a man.[10]

The first Sentinels produced had open canopies, although modifications to up-armour the vehicle also became commonplace. These Armoured Sentinels have recoil compensators in place of additional gyro-stabilizers which allow them to fire heavier weapons, as well as Auspex arrays to assist in its hunter-killer mission. The standard Sentinel's weapon load has always been a rapid firing weapon, which was originally an Assault cannon.[1] Later models however show a divergence in armament, with the Multi-laser being the most common, while other weapons include a Heavy Flamer, Autocannon, Missile Launcher, Lascannon or Plasma Cannon.[4]

Besides the addition of more armour or different weaponry, Sentinels can be modified in a multitude of ways. The most common include adding Camo Netting, a searchlight, smoke launchers, and/or a Hunter-Killer Missile. Other adaptations can be made depending on where the Sentinel operates, such as servo-driven claw spikes for a better grip when walking over glacial planes.[4]

The bipedal locomotion afforded by the Sentinel gives it a unique ability to advance into terrain that other armoured vehicles with tracks could not possibly hope to achieve. This allows it to stalk through dense jungles or urban ruins to locate and wipe out pockets of enemy resistance, though their light armor and exposed crew compartment leaves them vulnerable to even small-arms fire. Armored Sentinels which have an enclosed cockpit and heavier weapons however are used more as roving hunter-killer units, seeking out and destroying enemy tanks where they can find them.[4]

Because Sentinels typically operate far ahead of the main Imperial force, they tend to operate autonomously in squadrons of one to three Sentinels or as part of a larger recon troop. As such, pilots often use their own initiative with regard to their orders. Many pilots have a history as insubordinate mavericks, although due to their invaluable support in scouting this is usually overlooked. When they are not used in a scouting role they are deployed on the flanks of the army to harry enemy formations or act as mobile anti-armour squadrons.[4]

There are various versions of the Sentinel used throughout the Imperium. These modifications depend on where the Sentinel was produced and for what battlefield role they will play.

The Mars Pattern Sentinel is the basic Sentinel used throughout the Imperium originating from the Forge World of Mars. It is an open-topped vehicle armed with a Multi-laser, making it effective against infantry and light vehicles.[3]

The Armageddon Pattern Sentinel originated on the world of Armageddon as tank hunters, adapted with an armoured crew compartment and typically armed with a Lascannon.[3] The enclosed compartment is also a necessity for fighting on Armageddon in order to protect both the pilot and machine from the corrosive effects of the planet's ash waste sands.[7][10] Cadian Pattern Sentinels are produced on Cadia and typically mount a rapid-firing Autocannon, making it ideal for destroying armoured infantry and light-to-medium vehicles. Like the Armageddon patterns they too are often given extra armour in order to better protect the pilot.[3]

The Catachan Pattern Sentinel originated on Catachan and is often employed by other regiments native to Death Worlds. Adapted towards the claustrophobic close-quarters common to jungle fighting, it is armed with a Heavy Flamer and carries a massive chainsaw cutting tool, useful not only for clearing brush but also the enemy as well.[8]

The Elysian Pattern Sentinel or Drop Sentinel are a variant used exclusively by Drop Regiments of the Imperial Guard such as the Elysian Drop Troops. More compact than other versions and fitted with Grav-chutes, Drop Sentinels are deployed from high orbit or mounted inside Valkyrie airborne assault carriers in order to quickly enter the combat zone.[6] For this purpose they have modifications made to their power plant and cab to allow it to fit inside a transport once its legs are folded away.[10] Unlike other patterns, Drop Sentinels are generally not used as scouts, instead filling the role of mobile heavy support for drop regiments that otherwise lack ground-based armoured vehicles or heavy weapons.[6] One of such battles was when Drop Sentinels of the 23rd Elysian Regiment were engaged in assault and the subsequent defence of Hydro-plants 23-30. The battle rage for three days and all of the Regiment’s 42 vehicles were destroyed.[10] The normal weapons configuration is either a Heavy Bolter or Multi-melta.[6] Tallarn Pattern Sentinels as used by Tallarn Desert Raiders and similar regiments is ideal for fighting over open desert terrain. It has wider based feet which allow it to spread its weight over a larger area, preventing it from sinking into the sand, and includes sand filters to prevent the power-plant from being clogged by fine particles. Its typical Multi-laser weapon system is ideal for fighting infantry and light vehicles.[6] 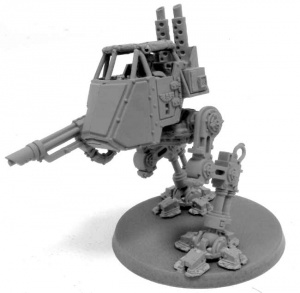 The Jump Sentinel is a variant of the Sentinel equipped with Jump Packs. It is known to have been used by the Imperial Army during the Horus Heresy.[11] The Support Sentinel is a heavily-armed variation designed to provide immediate fire support, either as part of a Sentinel company or attached to infantry platoons. It is armed with a Multiple Rocket Pod for anti-infantry firepower, or a Missile Launcher capable of firing Frag and Krak missiles. It is also modified with additional range-finder and target acquisition gear, including a Targeter mounted on a telescopic periscope, allowing those armed with a Missile Launcher to fire at targets outside their line of sight. Additional modifications include an armoured screen to protect the pilot against missile jet-wash, and a Drop pattern variant which incorporates the Drop Sentinel's design features. Support Sentinels are uncommon, with each Sentinel company lucky to have one or two squadrons, so they are highly valued by their commanders.[6]

Sentinel Powerlifters are a rear-echelon variant used primarily for loading and unloading equipment and supplies. These Sentinels are equipped with large hydraulic claws, also known as a Powerlifter, easily capable of crushing a man to death, along with a counterweight mounted on the rear to prevent it from tipping over. They are a common sight on airfields, space ship flight decks, and artillery positions, but will only be called upon to defend their position as a last desperate measure. [5] 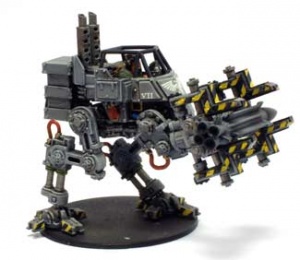 The Dictrix-class Sentinel, sometimes called Witches, are armoured enforcement walkers used to control prisoners. Instead of conventional heavy weapons, these walkers mount a launcher similar to a harpoon which can fire out a massive Neural Whip to non-lethally incapacitate multiple victims, before being reeled in to fire again. With a disruption charge capable of felling a Bull Grox, even a glancing hit can disable the target and can cause burning pain to anyone unfortunate enough to come within a metre of its discharge.[12a][12b][12c]

Chaos Sentinels are Sentinels that are used by the forces of Chaos.[13]