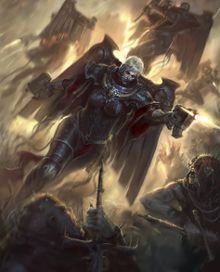 A squad of Seraphim[8]

Seraphim are Sisters of Battle who are specialized in hit-and-run close-quarter attacks using San Leor-pattern jump packs and pistols.[1]

Seraphim Squads are deployed as a fast attack squad with the Sisters of Battle. The squad can be accompanied by a Sister Superior. They usually carry a pair of Bolt Pistols, occasionally replaced by Hand Flamers or Inferno Pistols. The Seraphim are taught the ancient ways of the Daughters of the Emperor passed down since the order's creation on San Leor, and are experts in unarmed fighting, armed hand-to-hand combat, jump pack operation and the co-ordination and ambidextrousness needed to fire two pistols at once.[1][2][3]

Seraphim are the most elite warriors of the Sisters of Battle alongside Celestians, and select only the most talented and experienced Sororitas to join their ranks. To become a Seraphim, a Sister needs a level of skill and control that borders on the divine. Seraphim have a high turnover rate, often having to return to other combat squads as veteran leaders to train new troops.[2][3] They are highly respected within their Order, and are often called upon by their Canonesses to offer advice in councils of war. As befits veterans of such standing, they wield some of the most vaunted weapons of the sanctuary in which they serve, from golden-bladed Power Swords to sacred Plasma Pistols.

Due to their angelic profile, their intervention on the battlefield has been noted as particularly increasing the morale of imperial forces present and striking fear into the enemies of mankind, possibly an intentional result of their jump pack design and battlefield role, and has resulted in the avenging angels nickname.[3]