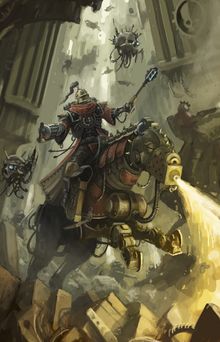 For a Skitarii to be promoted to the maniples of the Serberys corps is a great honour. Riding swift mechanical constructs whose razor-clawed limbs allow them to manoeuvre easily over shattered terrain, riders are mag-locked into gyro-stabilized positions to ensure stability in combat.[3]

Serberys Sulphurhounds are drawn from the most aggressive Skitarii clades; within their Forge Worlds' temples they patrol enclosures as fell guardians, while on the battlefield they serve as shock line-breakers. Once released by their Tech-Priest masters they smash into and through defensive positions before circling back to pick off any survivors.[3]