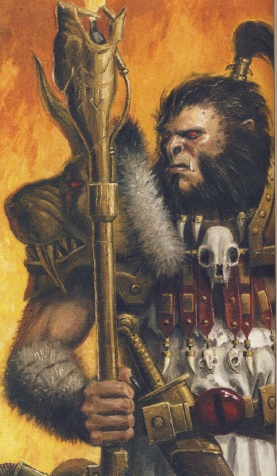 A Chaos Priest of the Serpent Lodge[2]

The Serpent Lodge was the name given to both a group of suspected Chaos cultists and their Temple on the planet of Davin. The Lodge members treated Warmaster Horus for the crippling injury he received campaigning on Davin's moon, and the Lodge itself is the location where Horus was turned against the Emperor as part of an elaborate scheme by the Word Bearers and Ruinous Powers.

The Temple of the Serpent Lodge, also known as the Delphos, was an imposing stone building set in the middle of a huge crater that had a diameter of thousands of metres. The crater was located at the end of a long valley, and the chief way to approach it by land involved traveling along a stone causeway set along the bottom of the valley. The causeway was lined with crumbling statues of ancient Davinite kings.[1a]

The actual temple building was an octagonal structure, with a bastion and tower built at each corner. A further eight towers surrounded a dome raised in the centre of the structure, each tower tipped with a fire. A single large archway led into the dome and the building itself. The approach to this dome involved climbing a set of massive stone steps that were lined with coal braziers and pillars carved to feature serpents. At the top of the steps was a path that narrowed as it approached the gate that was similarly lined with fires and pillars. However, between the gated archway and the top of the steps was a wide circular pool. This pool generated three narrow watercourses that rushed towards the steps, and in fact continued down it, with one channel on either side and one set in the middle, splitting the staircase. The gate itself consisted of two large doors of beaten and carved bronze. They featured a complex design only fully understandable when the gate was closed. It showed a large tree with spreading and fruit-laden branches. Many minor serpents twisted and spiraled around the edges of the design, but two great snakes coiled around the tree and each other, with their heads entwined together above it. Captain Garviel Loken of the Sons of Horus Space Marine Legion noted that this central image was strikingly similar to that worn by Marine Apothecaries; the caduceus. The paving in front of the gate continued the image of the tree by featuring a carving of three great roots that led to the edge of the wide pool. Apparently, once the gates were closed they could only be opened from within.[1a]

There was a secret chamber at the heart of the Lodge, protected by powerful magic and screening technology installed by disgruntled adepts of the Mechanicum in return for information given to them by the Word Bearers Legion. Circular in nature, the chamber had a sacrificial circle and sinkhole built into its centre. It was here that the Lodge members cast the spells that allowed Erebus to communicate with Horus during the Warmaster's stay in the Temple.[1b]

Davinite belief was that the injured taken inside were left to the care of the spirits of the deceased, and their destiny. They were expected to come forth healed, but if this did not occur after nine days, their remains were brought out and burned, the ashes cast into the pool. Horus came forth upon the ninth day.[1c]

The Serpent Lodge existed for many years on Davin's moon, worshiping the Dark Gods. In antiquity before Davin had even been settled by Humanity a form of the cult worshiped a serpentine deity known as Seytan.[1] During the Great Crusade when the planet was brought into Imperial compliance by the Luna Wolves and Word Bearers, the warriors of Davin fought under the banner of the Serpent Lodge, and gained the respect of the Legiones Astartes for their martial culture and prowess despite their Feral World status. After the Davin campaign the first Warrior Lodges were secretly established by the treacherous Word Bearers throughout the Astartes Legiones in a bid to usurp loyalty to the Emperor. Unknown to most, the Warrior Lodges were heavily based on the Davinite Serpent Lodge.[3]

60 years later following the Battle of Davin's Moon when Warmaster Horus was injured by the Anathame, the nearby Serpent Lodge was cited by Erebus as the only way to save the Primarch. In desperation the Luna Wolves agreed to have the Lodge Priests heal Horus, but in truth this was a plot to corrupt him with the powers of Chaos and bring about the Horus Heresy.[1] The Chaos plan was successful, and members of the Serpent Lodge were still employed as agents of Horus after his conversion to the Dark Powers.[4]