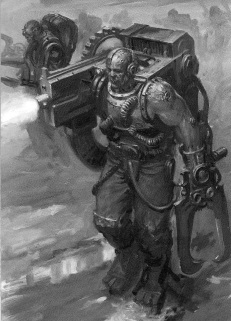 While many are vat-grown, often a criminal, particularly one who has offended the Cult Mechanicus, will be sentenced to "Servitude Imperpituis" and will be handed over to the Tech-priests to be mind-wiped, reprogrammed, and cybernetically-enhanced to serve some specific, rudimentary function. Servitors are mindless, possessing only the most basic of instincts. Their brains are programmed to perform only the task they were designed for. In rare cases, physical trauma may cause fragments of the servitors' previous human personality to resurface. The altered and fragmented brain of a Servitor functions poorly unless constantly supervised. Most will go into a state of mindlock, babbling incoherent nonsense as the Servitor tries to assert some form of awareness.[3]