"Death to the False Emperor"[2a] 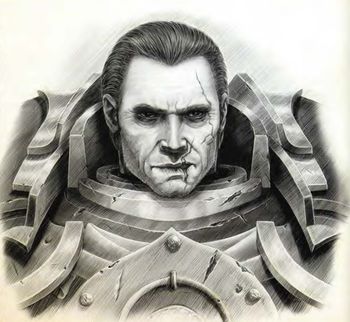 Jago Sevatarion[1a], also known as Sevatar and the Prince of Crows[5], was Captain of the Atramentar (First Captain of the Night Lords Legion) during at least part of the Great Crusade and the Horus Heresy. A Nostraman native and senior adviser to the Primarch Konrad Curze, Sevatar was regarded as one of the most dangerous Space Marines of his day, comparable in skill to First Captain Ezekyle Abaddon of the Sons of Horus, Lord Commander Eidolon of the Emperor's Children, and Chapter Master Raldoron of the Blood Angels. He is also most notably known for being the only warrior amongst the Legiones Astartes to fight Sigismund, First captain of the Imperial Fists to a draw. Though this act was done by headbutting Sigismund who took the act in good stead, a memory which would remain with Sevatar.

Jago Sevatarion was born in City's Edge, Nostramo Quintus, more than a century before the Horus Heresy. As a child, he began displaying psychic powers. He was eventually taken into the Night Lords, showing himself to be a fast and deadly warrior. He eventually rose to the post of First Captain and officer of the Kyroptera (an inner circle of senior Captains). Sevatar suppressed his psychic powers, but Konrad Curze was aware of their existence.[5] Sevatar had somewhat of a calming influence on Curze, convincing him to withdraw during a standoff with Corax and his Raven Guard during the Carinae Retribution. During the campaign Curze stated that the time to draw their brothers blood had not yet come. This perplexed Sevatar, who asked if Curze had forseen a day where such a thing would come to pass. Curze replied that he knew the answer to Sevatar's question as well as how the First Captain was destined to die and would divulge both. Sevatar, not knowing how he would inevitably die, did not raise the issue again.[8]

During the destruction of Nostramo, Sevatar agreed with Curze's course of action and saw the entire planetary society as sinners who must be punished. Despite the pleas of Shang, he refused to attempt to convince Curze to halt the planetary bombardment. Shang pointed out for the first time that Curze was going mad, something Sevatar denied. After a heated argument, he condemned Shang as weak but admitted that Curze was becoming more unstable. During the bombardment there were widespread mutinies among both mortals and Space Marines within the Night Lords fleet, and Sevatar and his Atramentar brutally put them down.[6a] 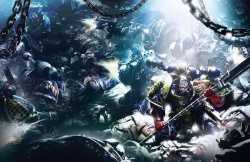 Sevatar was present with Captain Malcharion for the gathering of Captains and Commanders from the Night Lords, Iron Warriors, Alpha Legion, and Word Bearers Legions in preparation for the Drop Site Massacre. He greeted Argel Tal, Chapter Master of the Gal Vorbak, and stood at his side for the meeting. After Lorgar Aurelian concluded a speech to the gathered Astartes, the Space Marine's passions were fired up by Lorgar's rhetoric, and Sevatar became the first to utter the phrase "Death to the False Emperor", a rally cry which would be used by the forces of Chaos for millennia to come, and shook Tal's hand in the manner of fellow warriors.[2a] Following the battle, where the Gal Vorbak had revealed that they were Daemonhosts, Sevatar's attitude changed, and he became openly hostile to the Word Bearers.[2b]

Following the Drop Site Massacre, Sevatar joined his Primarch in the Thramas Crusade, battling the Dark Angels. When Curze offered a parlay to Lion El'Jonson, the two brothers agreed to be accompanied by two of their Astartes. Sevatar was one of Curze's bodyguards, along with Curze's Huscarl Shang. The two Dark Angels were Master Alajos and Paladin Corswain of the Ninth Order. Sevatar had seriously wounded Alajos during the Thramas Crusade, and mockingly promised to use his head as a trophy. When Corswain told Sevatar and Shang that he knew their mothers had mated with pigs in Nostraman, the two Night Lords were greatly amused, and Sevatar noted that his Nostraman had a horrendous accent but was very accurate. By this point, Sevatar was also wearing sinner's red gauntlets, a sign that he was condemned to death at Curze's hands for crimes committed by "traitors and fools". When Corswain asked which Sevatar was, he replied "both". The parlay broke down when Jonson attacked Curze for slandering his loyalty, and Sevatar would ultimately kill Alajos in the subsequent fight.[3]

During a later period of the ongoing Thramas Crusade, Curze was badly injured by Lion El'Jonson in a massive Dark Angels ambush at Sheol. Rather than flee with the rest of the Kyroptera, Sevatar ordered the Nightfall to remain and help the slower ships to evacuate. It subsequently fell to Sevatar to reform the VIII Legion survivors of the ambush. Creating a new Kyroptera (after killing two of its members, Malithos Kuln and Cel Herec) Sevatar divided the Legion among himself and five of his brothers into six Great Companies that would be allowed to operate independently of Legion command. In an attempt to awaken Curze, Sevatar used his long-suppressed psychic powers to enter Curze's mind, but was thrown back by his Primarch. Returning to consciousness, Sevatar found the Dark Angels had discovered the Night Lords. Mustering the Night Lords fleet, Sevatar was in the midst of commanding it in powering through the Dark Angels battleline when Curze awoke and ordered his First Captain to instead bring the Atramentar with him in boarding the Invincible Reason, the Dark Angels flagship. Complying with his Primarch's order, Sevatar joined him in battle. However, his unlocking of his psychic powers shortly before the combat began to have adverse effects upon him; he lost consciousness during the battle as a result, being captured along with the Atramentar.[5] 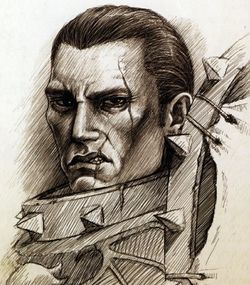 Jago Sevatarion during the Horus Heresy

Later, Sevatar is found imprisoned by himself, still aboard the Invincible Reason - whether his battle brothers have been transferred or he has been isolated is not revealed. He is at this point in terrible pain from his awakened psychic talent and believes he is dying. During his imprisonment, Sevatar is contacted by the Astropath Altani from the Astropathic Choir of the Invincible Reason, who seeks him out to ease his pain and stop his psychic talent from killing him. The girl also warns him that the Altani's contact to a heretic is discovered and the young girl is beaten until her spine breaks by the Master of the Choir - something that enrages Sevatar.[7]

When the Dark Angels initiate transfer of Sevatar to the prison transport ship Remnant of Brotherhood, he manages to escape their custody as Altani takes control of the 12 Dark Angels escorting him. Sevatar makes his way to the Astropathic Choir's quarters and methodically kills the Master of the Choir as punishment for him hurting Altani. He announces to the Dark Angels "I am justice. I am judgement. I am punishment." [7] Later back in his cell, Sevatar is filled with a new sense of cold focus that has eluded him for decades and his psychic powers no longer appear to be killing him.[7]

It was said that Sevatar was eventually killed during the Horus Heresy, and was succeeded as First Captain by Zso Sahaal, a Terran born marine. Following his death, the Atramentar largely dissolved. Some, like Apothecary Talos Valcoran, put this down to Sahaal not being a Nostraman, but according to the Atramentar asked by Mercutian, a member of First Claw, 10th Company, it was mostly because the Atramentar felt no one could live up to Sevatar's reputation.[1b] During a moment with his Chosen, Curze demanded Sevatar come forward, only to be informed that Sevatar was long dead, a revelation which left the Night Haunter extremely agitated.[4] Mercutian confided to Octavia, the Navigator of the Echo of Damnation, that he believed Sevatar was still alive, a prospect Talos dismissed.[1c]