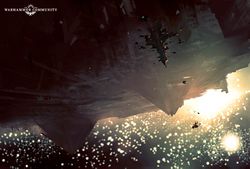 Exterior of the 7th Blackstone Fortress[2] 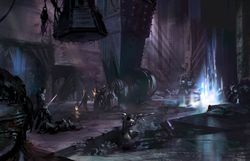 Impossibly old, the Blackstone Fortress is surrounded by a debris field of ancient vessels spanning millions of miles in all directions. These wrecks orbit around the station, which hides deep in its interior. These wrecks themselves are a tempting prize for scavengers, as they contain ancient wonders and weaponry. Traveling to the Fortress itself requires a small and nimble vessel. Near the structure is a small way-station known as Precipice, inhabited by a ragtag crew of explorers and scavengers from across the galaxy and consisting of a variety of races. An uneasy truce endures in this station, something which is enforced by a small cadre of powerful and influential captains looking to maintain stability for their own interests. Precipice is the final destination before the Blackstone Fortress itself, and is home to many merchants and information providers. From Precipice one goes into the nearest opening of the Fortress itself, known as the Stygian Aperture[1]

The interior of the Fortress itself is a brutal labyrinth of corridors and chambers. its geometric halls are vast, arrayed with spire-like towers and deep chasms dropping away into rivulets of energy. The Fortress is filled with mysterious wonders from across history and the corpses and remains of many past explorations. Travel inside the Fortress can sometimes be achieved by Maglev. However unlike the other six known Blackstone Fortresses, this construct reshapes its own interior regularly and makes consistent mapping near-impossible.[1]

The Fortress it fraught with a wide array of dangers. From savage Ur-Ghuls to Spindle Drones to the twisted creations of Chaos, exploring the fortress' interior requires martial prowess or at least a suitable bodyguard entourage. Many believe the Blackstone Fortress has traveled across space and time and collected these entities, deliberately steering them towards interlopers.[1]

Despite these dangers, many recent expeditions to explore the Fortress and plunder its wonders or even gain control of it have been attempted. These include the Rogue Trader Janus Draik, the Navigator Agent Espern Locarno, the Priest Taddeus the Purifier, the Eldar Ranger Amallyn Shadowguide, the Kroot Mercenary Dahyak Grekh, the Man of Iron UR-025, the Chaos Lord Obsidius Mallex, and the Ork Freebooter Skarburn Zapdakka.