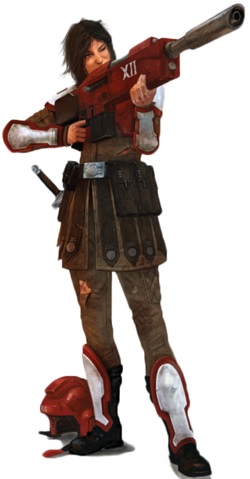 Soldier of the Severan Dominate

The Severan Dominate is a secessionist Human empire under the personal control of Duke Severus XIII.

Originally part of the Imperium and consisting of worlds Severus acquired in the Periphery Sub-Sector of the Calixis Sector with the help of Dark Eldar, when the region began to plunge into chaos during the Spinward Front wars, Severus announced his annexation of the worlds under his influence into a private fiefdom, popularizing the move as a revolution against Imperial tyranny.[1]

The Dominate maintains a bastardized version of the Imperial Cult used to enhance the power of Severus XIII. To this end, the Dominate maintains a corps of political officers known as Ducal Legates to enforce its ideology. Dominate ideology emphasizes three pillars, Interdependence, Justice, and honesty. While they seem lofty and progressive on paper, in truth Dominate ideology is twisted to allow for a functional totalitarian state.[2a]

Beset on all sides by Imperial Troops, Orks, Dark Eldar, and Chaos forces, the Severan Dominate somehow continues to withstand them all, if only tenuously. Thanks to Severus' many agents and orators, its populations still rally to the cause of their despotic master and willingly renounce the rule of the Imperium. Militarily, the Dominate maintains a small but capable army of mainly PDF troops and mercenaries.[1]

Severan Dominate Soldiers are drawn from across the worlds under Duke Severus’s leadership. Had events transpired differently, these very individuals might be serving in the Imperial Guard rather than opposing it. For many of these soldiers, ﬁghting against the forces of the Imperium is an uncomfortable prospect at best. They do not view themselves as traitors or enemies of the Emperor, but as victims of the unjust policies of the Adeptus Terra—that is, if they hold any view whatsoever of the wider issues at play. For many Severan Dominate soldiers, they are simply following orders and protecting their families back home. Of course, the same could be said of many Guardsmen. Severan Dominate soldiers are generally equipped in a similar manner to the Imperial Guard. In fact, much of their equipment was supplied by the Departmento Munitorum prior to the secession of the worlds which now swear allegiance to the Severan Dominate. However, the lack of Departmento Munitorum oversight and resources ensures a broader range of equipment than is seen even amongst the diverse regiments of the Imperial Guard. Many Severan Dominate regiments simply utilize the equipment of their home world’s standing armed forces, which they are able to keep maintained and supplied due to their close proximity and short supply lines. Consequently, various patterns of autoguns, shotguns, and other stub weapons are as common as lasguns amongst the forces of the Severan Dominate.[3a]

Sergeants of the Severan Dominate military are usually enlisted, just as those under their command. In most cases, a sergeant and his squad served together within a planetary defence force before being drafted to the Severan Dominate cause. In this way, they are not unlike most Imperial Guard sergeants. Also like their counterparts in the Imperial Guard, sergeants of the secessionist forces often have only a vague understanding of why they are ﬁghting a given battle, knowing only that they are following orders. In some cases, they do not even fully comprehend the nature of the war or the true severity of the Duke’s actions. Others, though, are fully dedicated to the secessionist cause.[3a]

The majority of those who have risen to leadership positions within the armies of the Severan Dominate hold a deep commitment to the secessionist cause, yet also a ﬁrm devotion to the Emperor and belief in His divinity. Though this seems an impossible contradiction in the minds of any loyal Imperial citizen, the Duke has spent many decades laying the groundwork for his rebellion. Ducal Legates and others continuously spread the Severan Dominate’s propaganda, painting the Imperium and its forces as the true traitors. Positions of responsibility within the armies of the Severan Dominate are reserved for those committed to the cause, those who believe that Duke Severus the Thirteenth is the rightful representative of the Emperor’s will. As beﬁts their status, lieutenants of the Severan Dominate have access to superior arms and armour. Those with the right connections or who are held in particularly high esteem by the Duke and his circle of advisors covet deadly bolt pistols and several lieutenants have earned the coveted Golden Laurel through acts of valour or in recognition of their tactical acumen.[3a] 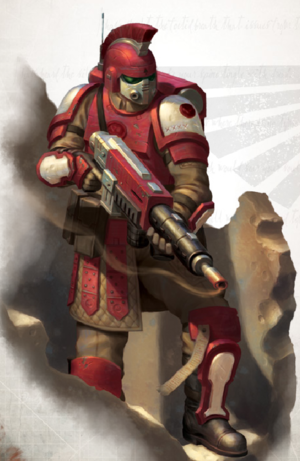 A Shock Trooper of the Severan Dominate