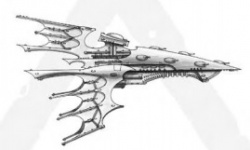 The Shadow Class Cruiser is a class of Eldar cruiser.[1]

It is typical of Eldar capital ships due to the use of large solar sails, providing it with immense speed and manoeuvrability. Often they are seen outrunning the escort vessels of other race, they are equipped with a prow Weapons Battery and keel Torpedo tubes.[1]

There have been many successful raids and battles with the Shadow class and there are also many famous ones. The most famous during the Gothic War was the Black Star commanded by Prince Conanmaol of the Executioners. He destroyed many Imperial capital ships as well as a huge amount of merchant shipping tonnage. It evaded destruction and still launches raids from the Graildark Nebula. Another vessel, the Fhianna Rethol, was the first to be captured relatively intact and was being studied at Argante Station when a flotilla of Eldar vessels attacked and fired a salvo of torpedoes at it, destroying it utterly.[1]