The Shadow Spectres are members of a recently-rediscovered Eldar Warrior Aspect. This shrine specializes in the deployment of stealthy, highly-mobile heavy firepower.[1] 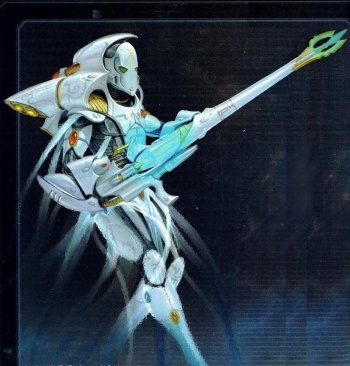 Shadow Spectres are armed with Prism Rifles, which pack the devastating long-range punch of the Prism Cannon into a man-portable package. They are garbed to appear as ghosts or wraiths, taking to the battlefield with jetpacks, holo-fields, and pallid Aspect Armour draped in thin, flowing, blue robes. [1]

It has been mentioned that Eldar Seers believed the Shadow Spectre aspect to have been lost.[1] This decline is owed to the loss of the aspect's Phoenix Lord, Irillyth[3].

All Aspect Warrior shrines represent an aspect of Kaela Mensha Khaine, the Eldar god of war. The Spectre Shrine epitomizes the Eternal Warrior, for whom death is no release from duty. It is therefore appropriate that the Shrine has historically been associated with the Wraithguard. Traditionally, Eldar who lose their lives in service to the Spectre Shrine have their spirit stone transferred to a wraithbone body; in turn, the Wraithguard have acted as guardians of the Spectre Shrine for many millennia.[4a]

The Shadow Spectres make use of a unique, complex targeting matrix known as the Ghostlight. This matrix further amplifies the effective range and power of the warriors' already-formidable weaponry.

When used, the Ghostlight will allow a Spectre squad to combine the beams of their Prism Rifles into a single, brilliant torrent of energy; the additional power allows the squad to fire a single incredibly long-ranged shot, allowing them to hit distant targets.[1]

The firepower of a shot fired from the Ghostlight is also increased somewhat, but is much weaker than the squad's combined firepower had they fired their weapons independently.[1] Even so, the drastic range increase allows a single Spectre squad to extend reach over the entire battlefield: two or three well-aimed, well-placed Ghostlight shots could severely cripple or outright destroy an opposing force's armoured support before the bulk of the battle has even been met. 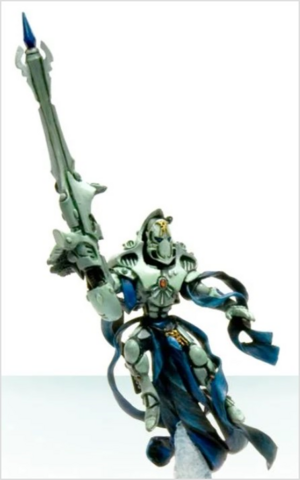 An Exarch is the leader of an Aspect Shrine. He is one that has travelled so far down the Path of the Warrior, that he can no longer turn from that path to follow another path. This gives them great skill and dedication.

In addition to the wargear of the aspect, the Exarch can be armed with a number of special weapons:

The Exarch may study the secrets of the shrine to allow himself and any of his Aspect warriors to go beyond the normal Aspect training.

The Phoenix Lord of the Shadow Spectres is Irillyth[3], the Shade of Twilight.