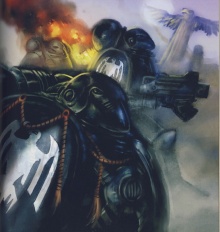 The Shadow Wardens were the elite Honour Guard of Raven Guard Primarch Corvus Corax. Formed before his discovery by the Emperor while he was leading his slave uprising on the world of Lycaeus, Corax was reluctant to allow the units formation despite warnings by his lieutenants that his enemies may try to assassinate him. In the end Corax agreed, and these warriors not only served with Corax on Lycaeus but were later inducted into the Raven Guard Space Marine Legion where they continued to serve at their Primarch's side. The Shadow Wardens were renowned for their stealth and ability to remain unseen despite always being at their Primarch's side.[1]

The Shadow Wardens took heavy losses during the Drop Site Massacre[1], but some such as their Captain Gherith Arendi survived.[2] Shortly before the Battle of Yarant, the badly depleted Shadow Wardens were reorganized into the Black Guard, which later became a Second Founding Chapter.[3]