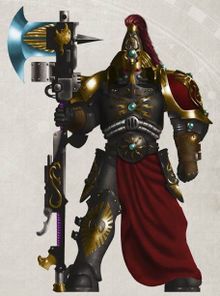 The Shadowkeepers are a Shield Host of the Adeptus Custodes which includes many Custodian Wardens and is tasked with guarding the last terrors of Old Night that dwell in the Dark Cells beneath the Imperial Palace.[1a]

The Shadowkeepers (also known as Warders of the Dark Cells) have guarded the Dark Cells for ten thousand years, over a hundred of their number ever on patrol in the corridors around the cells, with some individuals on duty for decades at a time.[1a]

At some point between M33 and M39 the Space Hulk Ominous Gift was detected heading towards Terra from the dark void. The hulk was deemed corrupt by Captain-General Aesoth Koumadra and destroyed from the inside by a force of Custodians led by the Lockwarden of the Shadowseekers.[1b]

During the Battle of Lion's Gate, Lockwarden Borsa Thursk gave the order for many of the Shadowkeepers to join the battle, leaving only a handful behind to guard the cells. When the Great Rift opened, several entities and artefacts were somehow released, or escaped, killing the Shadowkeepers left behind. Thursk ordered a retreat, abandoning the ongoing battle, but found several cells empty with no trace of their former occupants.[3]

The Shadowkeepers have now sent warriors out into the galaxy on secretive reclamation missions to find the lost remnants of the Age of Strife and return them to the cells.[1a] They have since deployed a force to the ruins of Cadia for an unknown but important mission directly ordered by Trajann Valoris.[1b]

As the Indomitus Crusade began the Shadowkeepers uncharacteristically came to the aid of the Imperial Fists by opening one of the Dark Cells and giving them the technology needed to restore the Phalanx.[4]

The leader of the Shadowkeepers is a Shield-Captain known as the Lockwarden. He is the sternest of guardians and should any escape the Dark Cells, he will personally lead the reclamation of the operation.[1a]

The Shadowkeepers wear black Custodian Armour, and their leaders are equipped with ancient weapons of mysterious origins intended as a last resort should any of the eldritch horrors imprisoned in the cells ever break free.[1a] The Auric Shackles are among the relics often carried by the Shadowkeepers.[2]