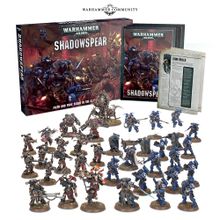 Shadowspear is a 2019 box set for the 8th Edition of Warhammer 40,000. It includes miniatures and full rules for Vanguard Space Marines and Chaos Space Marine Daemonkin.[1]

- War Zone Vigilus: a brief history of this embattled sentinel world and the events leading up to the arrival of Abaddon’s infamous Black Legion

- Into the Void: introduces the Vanguard Space Marines and the forces of the Black Legion that they uncovered on Nemendghast

- Game Rules & Missions: this section includes a tree campaign consisting of six Crucible of War missions inspired by the story explored earlier in this book

- Datasheets: for the six new characters and units in the set

- Sons of the Primarch: Chapter Tactics, Warlord Traits and points values for the Vanguard Space Marine models, weapons and wargear

- Daemonkin: a detailed background section on the Daemonkin, their bespoke wargear, heraldry and military role - Datasheets: for the five new characters and units in the set

- The Lost and the Damned: Legion Traits, Warlord Traits and points values for the Daemonkin models, weapons and wargear

- 2 Greater Possessed equipped with a variety of daemonic mutations

- 10 Chaos Space Marines (including an Aspiring Champion with chainaxe and plasma pistol), 3 with boltguns, 4 with bolt pistol and chainsword, 1 with plasma gun, and 1 with autocannon